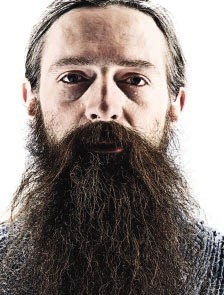 It's unclear whether former PayPal CEO Peter A. Thiel did this for all of us, or just so he can guarantee his place at the front of the line for the eventual treatment. Regardless, a better way to spend excess millions is difficult to conjure.

"Rapid advances in biological science foretell of a treasure trove of discoveries this century," said Thiel. "I'm backing Dr. de Grey, because I believe that his revolutionary approach to aging research will accelerate this process, allowing many people alive today to enjoy radically longer and healthier lives for themselves and their loved ones."

Right on. I always knew I was meant to live forever. How? Because, when I really think about it, it's totally unfair that there will come a day when the universe won't include me and my little world. It just doesn't make any sense. On the other hand, it makes all the sense in the world that, just as others have died before me, so shall I.

Please, o' mighty Science, deliver me from this paradox! I blame evolution and DNA for this cruel joke, for an imagination able to contemplate forever, coupled with a body that cannot. I blame religion for making humans complacent with a fairy tale promise.

And I blame science.

If the scientists hadn't spent so much time just accepting the premise that we all have to die someday, we might be living forever already. They have worked hand-in-hand with industry and capitalism to provide nearly enough useless consumer goods to allow us to occasionally forget our mortal condition; but really, I could do without about half a billion of those products in order to not have to die.

I'm not the only one. A group calling itself The Coalition to Extend Life recently issued a press release promoting "immortality as a national priority." They want people to sign a petition they hope will eventually be a million strong. "Our elected officials must be made aware there is massive support for immortality now!" it says on their website. You can also become a member for $30 a year, or just buy a $15 t-shirt that says, "REFUSE TO DIE."

On the other hand, metaphorical immortality has been around for a long time. It has been said repeatedly down the ages that fame or greatness, for instance, provides an existence beyond one's physical longevity. Children also offer this legacy benefit.

One can even attain a type of afterlife online. When 19-year-old college student Alicia Kay Castaneda was brutally murdered by her boyfriend with a baseball bat in Orange County, Florida, her website persona, "Enamored," continued to live through her Myspace page. It contains some of her thoughts and experiences, including a poem to the man who killed her, along with animated photo montages. The pages also serve as a memorial and ongoing conversation for the bereaved.

But how long will these artifacts remain online? "Digital immortality comes through these remnants of a person's online life," said Paul Saffo, a Silicon Valley technology forecaster and professor at Stanford University, "but that immortality terminates piece by piece when some tech person somewhere shuts down an account."

It seems that, ultimately, a legacy is not a viable substitute for immortality. And so, allegedly brilliant people like scientiest Ray Kurzweil push the idea of truly living forever. Ray holds audience with U.S. presidents and other very influential folks. He was even recently featured on "The Daily Show" beside Samantha Bee — how much more credibility could a scientist ask for?

Scientific immortality as seen through the public eye may still be an idea worth laughing at, but for how long? When the looming biotech boom starts making real advances, how fast will people's sentiments change, along with their demands? What is it worth to cheat your own death, and further, to imagine your parents and children being able to do the same thing? It could be dangerous to have the masses pondering this thought, and we can safely assume that the almighty leaders of business and state are aware of the possibility for unrest.

Think about people like Magic Johnson and Michael J. Fox and, before he died, Christopher Reeves — how overnight they became memebots for their respective afflictions once they were stricken, in the desperate hope that they could use their celebrity to channel the research and money needed for a cure.

The rest of us walk around sharing a delusion that we'll never die because at our cores, we know that we will. When something like cancer is cured, though, we'll start to imagine that it might be safe to throw off that delusion and replace it with a sense of real possibility. Then watch one of the fastest thought contagions history has ever seen, as each of us in our own way become advocates of curing the "disease" that is mortality. Who deserves to get that cure?

Kurzweil believes the "eternal divide" between haves and have nots is not going to be a fatal issue for the immortalist movement. He cites trends in bringing new technologies to market: at first, the technology is super expensive, doesn't work very well, and is rare; then it is expensive, works OK, and is more widely available; finally, it is super cheap or free, works great, and is everywhere. (Think cell phones or internet access.)

But this scenario assumes that society makes it through the first phase. Fear of death and knowledge of our own demise have driven humankind's deepest desires and anxieties since we appeared. To have that framework suddenly and fundamentally displaced by the promise of a real immortality will have psychological effects we cannot possibly predict.

I can predict one thing with certainty — when the day arrives (if it hasn't already) that I can flip the reaper the finger just by getting gene therapy (and you can bet it'll be covered by health insurance, because gene therapy increases an account's longevity along with an individual's), I'll be willing to do a lot more to make it happen than simply sign some lame petition.

My notion of what constitutes fairness and injustice will be radically altered if some capitalist douchebags get to live forever and the rest of us don't. Sure, it may be that all that's in our future is the death of the planet anyway (thanks to the same douchebags), but dammit, I'd at least like to watch my species' Final Act.