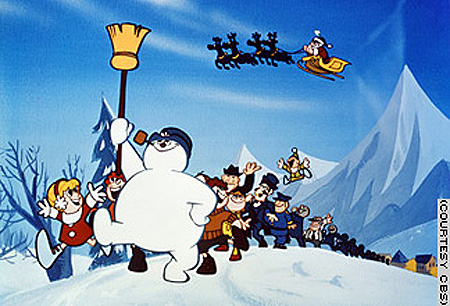 I was hanging out with my friend Gigi last week when the subject of TV Christmas specials came up.

Now, Gigi is one of the few people left in my peer group who, when presented with the name "Jesus," still thinks of our Lord and Savior, and not of a purple-clad pederast bowler, so you can imagine my shock at her choice of words regarding these perennial chestnuts of network broadcasting.

"I fucking hate those goddamned things," she spat. "All those Rankin/Bass cartoons and claymation things — I hate them."

I was flummoxed. Okay, well, for whatever reason I'm pretty corny about Christmas, and I watch "Rudolph, the Red-Nosed Reindeer" every year, but at the same time always thought "Frosty the Snowman" was gay as hell. So I cut her a little slack.

But certainly she must have had a soft spot for "A Charlie Brown Christmas"! Even the most godless of hellbound heathens at least gets a kick out of the sexual tension betwixt Schroeder and Lucy van Pelt.

"Oh god, I hate Charlie Brown worst of all. He's a total pussy, and Lucy is a little bitch who needs to get slapped."

I took a strong quaff of my holiday porter and struggled to get my bearings. My whole universe had been upended. But her reasoning was rather compelling — she pointed out that each and every one of these specials was fucked up in its own way, and depressing as hell.

Let's take a look at the most high-profile suspects, shall we?

Â» A Charlie Brown Christmas — Charlie is not only subject to constant derision by the ruthless hussies of the neighborhood, but also is practically (and literally, in the version found here) crucified like The Big J himself for bringing back a tree not to their liking. It takes Linus' fire-and-brimstone preaching to scare the cunts back to humanity.

Â» Rudolph, the Red-Nosed Reindeer — Boy, where do we start with THIS gem? Well, first, there's the total douchebag fascist of a Santa, grumpily employing an army of midgets with an iron fist. Then there's Rudolph's drunken, abusive prick of a dad, who's so bad that Rudolph has to run away. A little bit more realism and Rudolph would have ended up a gay street hustler on Santa Monica Blvd. And don't get me started on the eugenics experiment known as the Island of Misfit Toys.

Â» Frosty the Snowman — As previously mentioned, I was never a big fan of this one, but it's worthy of note simply because they manage to snuff out the main character. Of a Christmas special. Ouch.

Â» The Year Without a Santa Claus — Everyone loves Heat Miser and Snow Miser, but one of the reasons they stick out so much in this special is that even Santa himself is so depressed that he's about to go out like Goering at Nuremberg.

Strangely enough, in all my years of watching these Christmas specials, I hadn't really noticed The Pattern — not a single one of these shows presented a cheery vision of the yuletide season. But now I had swallowed the blue pill and could see it all for what it was — clearly a conspiracy (by the Masons? Jews??) to thin the population by driving the most emotionally vulnerable of us to blow out our brain stems when the Heat Miser shows up.

What easier way to deal with a global population that's spiraling out of control? Certainly there's little other incentive for ABC and CBS to keep trotting these dinosaurs out; each year brings diminishing returns in the ratings department, as the specials are hardly even promoted, and parents who give a shit have already bought "Santa Claus is Coming to Town" from the DVD bargain bin.

Maybe the most diabolical aspect of the conspiracy is how it's managed to identify the weakest of our race, like the wounded wildebeests they are. Yes, I'm talking about the few poor bastards out there at the mercy of a pair of rabbit ears and coked-up TV execs, forced to subsist on the meager crumbs of network TV.

I can remember one dark Christmas season when I was one of them, the huddled masses of immigrants, white trash, buggerers and thieves. I'm pretty sure the only channel I could get on my aluminum foil-enabled coat-hanger antenna was ABC, and "A Charlie Brown Christmas" was on. So I watched it.

I was doing pretty well at first. As sad as Vince Guaraldi's music is, I am sometimes actually comforted by melancholy music, so that was okay. It was only after Charlie Brown got that fuckin' sad-sack tree that my psyche became unhinged. By the time Linus started quoting scripture, I was busy writing my last note in Crayon with my head stuck in the oven.

Luckily, just as I was drifting into blissful unconsciousness, I remembered that the first Victoria's Secret Fashion Show was due to air that next week, and the prospect of rubbing one out to free TV (quite a rarity) reinvigorated my soul. In the interim between that first live-action lingerie catalog and this year, we've seen the rise of, among other things, affordable HDTV. Rabbit ears are a thing of the past, and angel wings —in their digital sexiness — are the future.

If the theme of the old Christmas specials was in fact that the holidays are red in tooth and claw, then that suggests evolution — analog begets digital, dour animation begets barely-clad boner bait. So maybe it isn't such a lamentable plot after all. I might even venture to say, "It's a Wonderful Conspiracy!"

See Also:
Christmas 2.0: Subverting the Holidays With Re-dubbing
Death at Christmas
They're Dreaming of a Boobs Christmas
Christmas with Hitler

6 thoughts to “A Christmas Conspiracy”