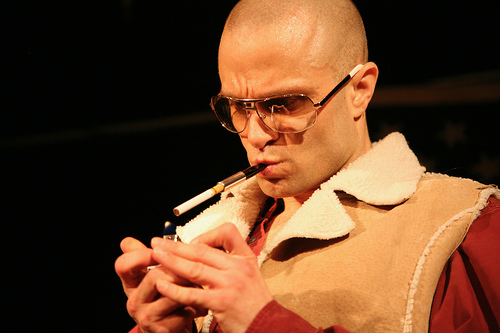 Twelve weeks ago we recorded an interview with Paul Addis — the man who burned the Man and was promptly arrested for arson. And even back then, he was constantly flicking his lighter.

"He never asked for permission to smoke in my house," remembers Jeff Diehl, co-host of the The RU Sirius Show. "And he chain smoked the whole time, even though he doesn't inhale."

This was at least partly because he was in character — Addis was performing as Hunter S. Thompson in a one-man show (a local newsweekly said it "feels like a reckless, all-out verbal assault") called "Gonzo: A Brutal Chrysalis," and was discussing his idol. Before the show was over, he'd identified the "heir apparent" to the Gonzo journalist.

He is on the mission... I first noticed him about two years ago when he went to Burning Man and proclaimed it for what it is — toothless and wallowing in its own muck and irrelevant to anyone or anything...


Eight weeks later, we interviewed Larry Harvey, the festival's founder. While there's no indication of what motivated Addis, Burning Man was already under criticism for a new policy.

On our podcast, Harvey addressed a simmering controversy over the presence of environmental exhibits at the base of the man which some participants thought were too commercial.


I don't see that commerce and community are allergic to one another. That's absolutely absurd... For instance, when participants are producing something that others might need in the desert, we let people know about it. So you can take those two value systems and make them overlap in such a way that they reinforce one another... To be against commerce is to be against your shoes, your shorts...

Addis's anger at the festival pre-dates the controversy. Laughing Squid's Scott Beale discovered that five years earlier, Addis praised a reporter at San Francisco's alternative newspaper, SF Weekly — for another negative article about the Nevada festival, saying it showed that the festival was over-controlled.


One by one the rules have risen since 1997, and not just to protect the participants from themselves. Those rules and judgments, such as what art is permitted in Black Rock City and radical free expression's outer limits, are determined in line with what will make the most money for Burning Man and generate the fewest potential controversies in the media. As such, Burning Man's overall relevance is kept safely within the realm of harmless diversion, quietly under the feet of the same elements that tame all other aspects of society.


In the letter he also laid into Burning Man founder Larry Harvey. "No amount of diffusion filters can give Harvey what he doesn't have: vision or loyalty," Addis wrote. "Don't fear the Hat, ladies and gentlemen. He's just trying to realize what it's like to be the Bill Graham of the 21st century."

This morning on a dark playa, at 2:58 a.m., some festival goers gathered to watch the lunar eclipse, according to an article in the San Francisco Chronicle. A festival organizer told the Associated Press that Addis was then spotted by many festival-goers — deliberately lighting the Man on fire. A blogger at C|Net reported the frantic conversation he overheard on the Burning Man communications channel:

...the most poignant moment of all, however, was when Crimson Rose, one of the six people on the Burning Man board that runs the event and the person in charge of the Man, said...

I want that asshole arrested...And I want the first shot.

"I just spoke with Chris Radcliffe, who is currently in Portland" Scott Beale at Laughing Squid wrote, "and he said that he has paid the $3200 bail for Paulâ€™s release, but they have not let Paul out yet because he is refusing to give his name to authorities."

A 56-year-old lawyer from Napa who was at the festival gave a disgusted quote to the Reno Gazette-Journal. "Nowadays people seem to want to use terrorist acts for political reasons rather than by debating, talking or reasoning." And a Burning Man ranger — Ranger Sasquatch — saw the attack as something even more pitiful.

"Someone went to a great extent to interfere with everyone else's burn. I think, frankly, an attention whore has made a plea for attention."

There may be more behind the act's motivation than that, and it probably would be instructive to think, "What Would Hunter Do?"

RU Sirius Show co-host and life-long admirer of HST, Steve Robles, thinks he knows: "Hunter would have stopped attending when they banned firearms and started organizing camps so you wouldn't get run over by a wayward car in the middle of the night while sleeping off the tequila."

Then again, it is also true that Addis' one-man show is poised for a West Coast tour.

See Also:
Prescription Ecstasy and Other Pipe Dreams
Interview with Paul Addis, a.k.a., B. Duke
Catching Up With an Aqua Teen Terrorist
Has 'The Man' Infiltrated Burning Man?
Anarchy For the USA: A Conversation with Josh Wolf
California Cults 2006

33 thoughts to “Burning the Man With Hunter S. Thompson”