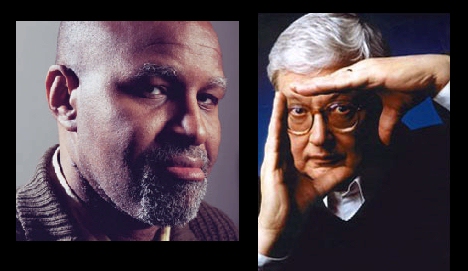 Roger Ebert won the first Pulitzer Prize for film criticism. But 33 years later, is he part of the problem?

That's what Armond White is suggesting in a 3,200-word essay arguing that Ebert's "TV glibness" misses the meat of movies. Critics today discuss movies "simply as entertainment" detached from their moral and political context, White argues, and internet bloggers are compounding the problem with an elite hipsterism which is "diminishing cultural discourse."

Vanity Fair's James Wolcott quipped that the column "has something to annoy, invigorate, and agitate just about everybody."

The 20th anniversary issue of the New York Press found Armond White declaring war on the deadened souls of the movie-loving literati. This week White, who heads the New York Film Critics Circle, accused critics of ignoring politically-relevant movies like Steven Spielberg's Munich and War of the Worlds. Instead they'll only endorse dishonest films like There Will Be Blood or Gus van Sant's film about the Columbine shootings, the kind of movies White describes as "irresponsible," "pseudo-serious," and "sometimes immoral or socially retrograde."

And where is Roger Ebert's big contribution to this cultural dialogue, White asks — his insightful new idea or his notable style? But White takes his attack even further by noting Ebert's substitutes on the show now "loyally prevaricate in Ebertâ€™s manner — a 'criticism' show owned and sponsored by the Disney conglomerate!"

"Prevaricate" is a strong word, but White is suggesting an industry-wide pattern of dishonesty spotlighting the movie industry instead of the movies. For example, when Premiere launched in the last year of the Reagan presidency, it focused on box office receipts "for that era enthralled with tax shelters, bond-trading and pro-trust legislation," and the magazine ultimately "perverted movie journalism from criticism to production news." To this day, White concludes, we're left with film criticism "that's blurred with celebrity gossip."

But even more he objects to a "disrespect for thinking" — and this is where the bloggers come in. If it's a tragedy, "itâ€™s not just for the journalism profession betraying its promise of news and ideas but also for those bloggers."


The love of movies that inspires their gigabytes of hyperbole has been traduced to nonsense language and non-thinking.

It breeds a new pinhead version of fan-clubism.


Unfortunately, the "post-Tarantino cinema" requires critics to reach for the esoteric in a kind of grass root elitism. With the world of film criticism now globally decentralized, it crowns "a network of bizarro authorities" — pompous trend-followers "with a hipster/avant-garde pack mentality...an opinionated throng, united in their sarcasm and intense pretense at intellectualizing what is basically a hobby." White accuses "the Internetters" of confusing the ability to publish online with democratization — "almost fascistically turning discourse into babble."

"...itâ€™s mostly half-baked, overlong term-paper essays by fans who like to think they think."

Roger Ebert once confronted a similar issue with film critic Pauline Kael, according to a story White adds to his column. Ebert asked Kael if she watched his show, legend has it, and Kael replied dismissively that "If I wanted a layman's opinion on movies, I don't have to watch TV."

But Ebert himself takes a more philosophical view to the flood of online voices. When the web was young back in 1996, Ebert wrote a column for Yahoo! Internet Life with his reviewing partner Gene Siskel assessing the movie information available online. "You can find out almost anything about the movies on the Web," Ebert wrote.


But Friday saw an announcement that for the first time the Annual Roger Ebert Film Festival would be held without Roger Ebert. Earlier this month 65-year-old Ebert made headlines when he announced he'd return to writing movie reviews after a series of health problems, though he'd forego a fourth surgery which would restore his ability to speak. "I am still cancer-free, and not ready to think about more surgery at this time," he wrote in a letter in the Chicago Sun-Times (adding "I should be content with the abundance I have.") Ebert adopted his familiar playful tone — "Are you as bored with my health as I am?" — but stressed a familiar passion. "I still have all my other abilities, including the love of viewing movies and writing about them."

After three decades in the public eye Ebert is one of the most familiar faces on television, and he seems blissfully unaware of White's column. Friday the Chicago Sun-Times site even boasted a fresh post on Roger Ebert's blog — titled Ebertfest in Exile.


Every year I keep meaning to include "Joe vs. the Volcano" in Ebertfest, and every year something else squeezes it out, some film more urgently requiring our immediate attention, you see...


Ebert writes honestly that the movie "was a failure in every possible way except that I loved it."

Did White launch his argument at the wrong time? "Donâ€™t misconstrue this as an attack on the still-convalescent Ebert," White warns. "I wish him nothing but health. But I am trying to clarify where film criticism went bad." But White's article still drew a thumb down from blogger Matt Zoller Seitz.

"His simplistic denunciation of the meaning and impact of Roger Ebert — who has done more to widen the tastes of the movie-going public and popularize basic cinema literacy than any critic in the history of print — is shameful, and would be so even without the 'I wish him well as he recovers' parenthetical."

In fact, it was the online blog Defamer that identified the context for Armond's remarks. "Escalating Film Critic Crisis Enters Crucial 'Everything Sucks' Phase" read their snarky headline, linking the introspection to anxiety about the recent dismissal of several prominent newspaper film critics. "The discussion turned especially profound this week as a selection of esteemed critics moved on to slapping anyone and anything that would stand still long enough to absorb their blows."

Sympathy may be rolling towards Ebert in this discussion, but even before his column, White had already racked up an unflattering section in his Wikipedia entry labeled "controversy"

He frequently praises films that almost all other critics have drubbed, such as Little Man, Sahara and Against the Ropes. He often focuses a large portion of his reviews to attacks on the critical establishment... He is also frequently accused of being an aggressive pop culture writer who lends intellectual legitimacy to commercial product.[citation needed]


Of course, this could be dismissed as another half-baked term paper essay from the opinionated throng. The entry also notes dutifully that White "pioneered the case for the music video being one of the most significant postmodern art forms" and authored a book on the life of Tupac Shakur." (Library Journal wrote that "White has interviewed few subjects and done only modest secondary research in his attempt to place the rap star in a larger social and cultural context. This will appeal mostly to fans of standard rock biography....")

But it may be Google News that delivers the ultimate verdict. Searching for references to White's article turns up exactly one — the snarky sendup it received at Defamer. Ironically the only news outlet paying attention is one of the bizarro authorities with their "hipster/avantage-garde pack mentality."

If a critic challenges the awareness of film critics and no one notices — does he still make a sound?