It's been over a year since cartoonist Nicholas Gurewitch entered semi-retirement. But he's working on a movie, a TV show — and he even made a surreal appearance on a Fox News interview show. And he's left behind a message for his fans, tucked away in plain sight in the comic strip Catch Phrase. "There's no secret message," Gurewitch told us last week. "There's an overt message perhaps. That sometimes Life can pigeonhole a person.

"That's something I personally believe is a danger..."

So in the last 13 months, the 25-year-old cartoonist has drawn just that one strip while he explores even bigger mediums. "I'm very, very excited to imagine either of the films I'm working on being made," Nicholas told 10 Zen Monkeys. "I might very well post production materials for them on my web site in the near future.

"I haven't been home in three weeks because I've been script-writing with friends."

And Wednesday he finally released what may be the final collection of his Perry Bible Fellowship strips. It contains "a heck of a lot more," Nicholas told Publisher's Weekly, and the book's official site lists out bonus features like unpublished "lost" strips and original sketches, plus Nicholas's revealing behind-the-scenes interview with Wondermark cartoonist David Malki.

An earlier collection, The Trial of Colonel Sweeto, will be discontinued, and this book is "more of a deluxe edition," says Darkhorse Publishing's publicity coordinator, promising there's more than 20 strips that weren't in the first volume, "so its a more complete library."

They warn that this will probably be the final collection of Nicholas's work, though in December the cartoonist told us he was "taking it easy, preparing some ideas," and in last week's email promised "I'll probably be posting a new PBF soonish." (The site was offline briefly in December, but only because "my Australian server guy fell on hard times.") And in this book, "Nicholas went through and talked about a lot of the process he was going through," according to Jacquelene Cohen, a publicist at Dark Horse publishing. "He put a lot of thought into his inspiration."

Working in two countries, Nicholas prepared a pilot TV show for British television while also retouching his strips for the book and remastering their colors. In fact, the book's publication date was delayed six months while Nicholas gave it the same lavish attention as his web comic. "He really wanted to be thorough and give each strip the time it deserves," remembers Cohen, saying only that he committed "a painstaking number of hours put into making this as special as it could be."

And the TV show? It would be a series of sketches — including at least one based on the surprise-hazing strip Weeaboo. "The guys at the company that produced it — Endemol — fought hard to make sure that comic was adapted," Nicholas told us last week. "Most of the material is sparkling new. I wrote it with my friends." And the scriptwriting received expert supervision by one of the writers of the surreal British comedy show Look Around You, Robert Popper.

"He was a great guy," adds Nicholas.

The BBC and the rival Channel 4 network are both reviewing the show now. ("I've been told that the hurting economy has hindered the speed of their decision-making," Nicholas notes — but he says that both networks are still interested in it.) In fact, Nicholas had already experimented with making movies out of some of his most famous strips, including New Specs for Ken and A Kiss For Joe (a two-minute film in which Nicholas himself makes an appearance).

Last week Nicholas told us he's now working on the script for a feature length film (along with his friend Jordan Morris). "My buddy Jordan is always really good about knowing how I should amplify an idea," Nicholas says, "and he's come up with ideas [for the strip] on his own. We're all kind of on the same wavelength collaborating, and it's extremely easy." Nicholas explained to one interviewer that "When weâ€™re both giddy with laughter, I can tell weâ€™re on to something good."

Nicholas seems to have cinema-sized dreams — Juno screenwriter Diablo Cody even wrote the introduction for his new book — and Nicholas offered a simple explanation to the Daily Cross Hatch. "I think a lot my ideas have grown so weird that I think I may need another medium for it." Nicholas has always been clear about his reasons for slowing the publishing schedule: "I want to do other things besides be a cartoonist." He discusses the transition in his book's introduction, and Wondermark's creator David Malki makes a provocative point — "We'll never know what kind of novels Charles M. Schulz could have written."

Nicholas also uses the interview to suggest that he's taking a lesson from the cartoonist who created The Far Side. "I'm sure Gary Larson had trained his brain by the peak of his career to derive the unbearable oddness of any slice of life. Like, I'm willing to bet that there's a muscle in his brain that he just honed, so that he could see all of life a certain way... If he's constantly looking at the world with that vision, and it's an honest vision, I don't think he can do much wrong."

But Nicholas also makes sure he acknowledges his admiration for Bill Watterson, the popular cartoonist who fiercely resisted merchandizing of his comic strip, Calvin and Hobbes. ("Bill knows better than anyone the value of keeping your characters from appearing on things that get thrown away.") In the same spirit, Nicholas's new book comes with a satin-red bookmark, and was designed with an eye for quality. "This book will look great as a (sick and twisted) coffee table book," wrote one reviewer on Amazon.

"It's almost a shame to put it in a shelf as the cover is such eye candy..."

Dark Horse Publishing acknowledges that "We didn't really understand the potential of his first book, and it ended up being a major, major success." (Nearly 27,000 copies were sold before the collection was even released!) Jacquelene Cohen remembers that when Nicholas visited trade shows, "he would have lines wrapping down one aisle and then halfway down the next — people mobbing him for autographs and signed prints and books. It was crazy — like mayhem.


Beyond the Perry Bible Fellowship

It's been 13 months since Nicholas reverted the strip to "a pace I'm more comfortable with," and over the summer he told interviewers that "I doubt they'll have regular intervals. But that's something I'll focus on as soon as I finish up work in these other areas." Fans may miss the strip, but Nicholas shares a secret in the new book — just how much care went into the online strips (even after they'd been published in newspapers). "I think there's about a hundred hours' work difference between the 'Commander Crisp' that I finished for the newspapers and the 'Commander Crisp' that I finished for the web."


I've lost a week's worth of work before because I've realized that a comic could be done better. I scrap stuff all the time. In fact, I find it kind of exciting to be able to scrap something I've put hours of effort into.

A lot of times, you work all that time to maybe give your mind some liberated state that allows you to do the very best job that you can do. 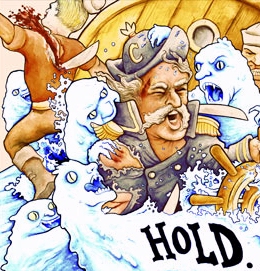 A panel from "Commander Crisp"
The last year suggests the same freedom may be growing from Nicholas's entire Perry Bible Fellowship experience. After seven years of laboring over the strip, it may become the first creative outburst that just unlocks an even greater one. "I'm never worried about scrapping something," Nicholas says in his book.

"Because a lot of times that fragment that you labored over ends up finding a home in some other future work."

9 thoughts to “What Happened to the Perry Bible Fellowship?”