The following is an excerpt from Everybody Must Get Stoned: Rock Stars on Drugs. The book was inspired by Paul McCartney on Drugs, an article I wrote for 10 Zen Monkeys in January of 2007.

In researching this particular section, I relied heavily upon two great sources: Please Kill Me: The Uncensored Oral History of Punk (An Evergreen book) by Legs McNeil and Gillian McCain and High Times magazine. Other major sources for the book included Celebrity Stoner and a great book titled Waiting For The Man: The Story of Drugs and Popular Music by Harry Shapiro.

During the latter half of the twentieth century, rock stars were privileged with the opportunity to experience just about every imaginable thrill. They were young, they were aggressive, many of them were wealthy, they were in a culture where thumbing your nose at authority was the rule rather than the exception, and they were treated like sex gods by members of the opposite or desired gender. And, of course, there were plenty of drugs around to get crazy with. These are some of the twisted highlights or low-lights of rock star behavior related to drugs.

1. Blood of the Stooges

In 1969-1970, Iggy Pop and his seminal proto-punk band the Stooges lived together outside Detroit in a house they nicknamed "Fun House." (They also named an album for it.) Besides writing and recording music, they were injecting massive amounts of drugs, mostly heroin. When setting up a hit, the Stooges would squirt the blood out of their syringes and shoot it all over the walls and ceilings. After a while, enough blood had accumulated on the apartment's walls to create a sort-of degraded smack addict's Jackson Pollock mural. Ron Asheton, the only Stooge member who was not a junkie and who lived elsewhere, described it "...a lot of times there would be fresh stuff. Then it would dry on to the table or on the floor.... I wish I was smart enough to take pictures of it because it would have been a masterpiece."

2. Sid Goes to the Toilet 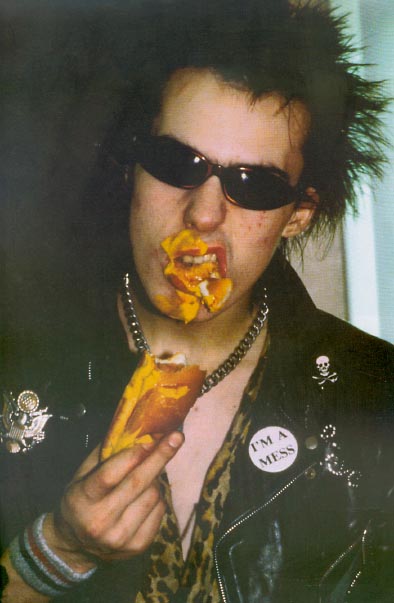 Dee Dee Ramone found himself at a party in London, hanging out for a few moments in the bathroom snorting great quantities of speed. It wasn't the sort of place you'd want to hang out for too long, as Dee Dee quickly noticed that the bathroom was disgusting — sinks, toilets, everything was full of vomit, piss, and shit. Sid Vicious — a key figure in the London punk scene but not yet a member of the Sex Pistols — wandered in and asked Dee Dee if he had anything to get high on, so Dee Dee generously gave Sid some of his crank. Vicious pulled out a syringe, stuck it into a toilet filled with puke and piss, and then loaded it with speed and shot himself up.

The right-wing rocker Ted Nugent is known for being very antidrug and very prowar. The Motor City Madman happily calls out any pussy-ass traitor not ready to grab a gun or a bomb or a nuke and show those towelheads that we mean business. But back during the glory years of the Vietnam war, this most macho chickenhawk in the Republican firmament went to extremes to make sure his own pussy ass didn't end up in Vietnam, and he used drugs to do it.

In a 1970s High Times interview, Nugent related the story of how he avoided the draft. For 30 days prior to his appearance before the draft board, the hairy and bearded Nugent stopped brushing his teeth, bathing, washing himself, or combing his hair. He ate nothing but junk food and high-fat foods and drank nothing but Pepsi and beer.

Then, a week before his physical, Nugent pulled out all the stops. He stopped going to the bathroom. "I did it in my pants. Shit, piss, the whole shot. My pants got crusted up." Then three days before the exam, Nugent started staying up with the help of crystal meth.

When he finally went in for the army physical, Nugent was so sick that he passed out during his blood test. During the urine test, he couldn't pee. And when it came time to give them some excrement, he pulled down his pants and it was all there and ready. In fact, he got it all over his hands and arm. Nugent bragged to High Times, "...in the mail I got this big juicy 4-F. They'd call dead people before they'd call me.... I just wasn't into it. I was too busy doin' my own thing." Didn't Dick Cheney say something like that? (Nugent has recently claimed that he made this story up.)

4. Can You Tell the Difference Between Tripping Out and Nodding Out?

In 1967, rock guitarist and notorious smack addict Michael Bloomfield, who had played with Bob Dylan on his classic mid-sixties albums and as a member of Blues Project, had his own band of fellow musician-junkies. They called themselves the Electric Flag. They were hired by B-movie master Roger Corman to create the soundtrack to Corman's LSD movie The Trip (starring a young, acid-gobbling Jack Nicholson).

The band was invited to the film opening, where they took the front-row seats that had been set aside for them. But the lads had arrived so loaded down on smack that they were nodding off and spacing out throughout the film. In a High Times interview, Bloomfield added that the band was also encouraged to sleep by their positioning in the theater: "We're sitting in the front row, and we're like one inch from the screen — we have to sit at a 90 degree angle just to see the movie..."

When the movie ended, everybody filed out except for Bloomfield and his coterie of stoned musicians, who were glued to their seats, some with eyes closed and the others glassy-eyed. Confronted by members of Corman's crew as to why they were not leaving the theatre, Bloomfield had enough presence of mind to come up with an excuse that would be socially acceptable at that time and within this particular milieu. "We all had a lot of acid," he told them. In 1967 Hollywood, at the screening of The Trip, this had to be respected. Not wanting to bum the fellows out during such a sensitive event, the crew members left the musicians alone in the theater. It took them several hours to pry themselves from their chairs.

Japan has a reputation for searching rock stars for drugs. Most famously, Paul McCartney spent some time in jail after going through Japanese customers (see also the chapters: "The Beatles on Drugs" and "Big Busts and Big Deals"). So when Guns n' Roses guitarist Izzy Stradlin was warned by his manager to get rid of any drugs he might have before going through customers in Japan, Stradlin put them someplace he knew he wouldn't lose them — in his stomach. He must have had quite a stash, because he wound up in a coma for 96 hours.

7. But Why Is Elton "Still Standing?"

In his mid-1970s heyday, Los Angeles declared "Elton John Week." To celebrate, the glam rock pasha invited his relatives out to L.A. to celebrate. Allegedly, Elton took 60 Valiums, jumped into a hotel pool, and shouted, "I'm going to die." His grandmother was heard to comment: "I suppose we're going to have to go home now."


8. When Ozzy Got Some of That Good Government Cocaine

In a 1999 High Times interview, Ozzy talked about the time he had the best coke he'd ever had. He said, "I'm lying by the pool one day and I met this guy and I ask him, 'You want to do some coke?' He goes, 'no no no.' I'm whacking this stuff up my nose, it's a brilliant sunny day, and this guy's sitting there with one of those reflectors under his chin getting a suntan. I say, 'What do you do.' He says, 'I work for the government.' 'Uh... what do you do with the government?' 'I work for the drug squad.' I sez, 'You're fucking joking.' He shows me his badge. I fuckin' flipped...flames were coming out of my fingers, man. He says, 'Oh you're all right. I'm the guy that got you the coke.'"

The QuestionAuthority Proposal
Bush Administrationâ€™s Greatest Hits (To Your Face)
Catching Up With an Aqua Teen Terrorist
Don't Go There: Top 20 Taboo Topics for Presidential Candidates