I'm not saying Nancy Drew was a lesbian. (Believe me, I still remember the pushback on our 2007 article, How Gay Were the Hardy Boys.) But the original Nancy Drew stories were written in 1930, and sometimes their outdated language creates a problem.

"Will you tell us why you came here, and promise never to divulge to a soul a word about this place?"

"I promise nothing," Nancy declared.

"What!" the men ejaculated in astonishment.

I hate it when that happens....

That's an actual quote from the 1933 edition of Password to Larkspur Lane. The language was updated in later decades, and most readers have never seen the original texts. But before Nancy even hooked up with her butch friend Bess Marvin, she'd enjoyed this strange adventure with a young femme named Helen Corning.

After Helen and Nancy Drew encounter a suspect, Helen gushes "I just hated the looks of that man. Let's think about something pleasant." And then...

The girls accordingly enjoyed themselves by admiring each other's dainty lingerie, choosing the stockings which would best match slippers and frocks, and so for a time forgot the mystery. Helen was in ecstasies over Nancy's powder blue evening gown...

I swear I'm not making this up! ("Helen kissed her chum," it says on page 173.) That's how mind-bogglingly innocent people were in 1933. Or... There's something else going on here.

Nancy even spends the night sleeping with Helen. And the next morning, when she tells Helen she has "an adventure" in mind — Helen can't wait....

She threw back the covers of the bed and began dressing rapidly. "Hurry up, Nancy," she cried gayly.

"Lead me to this adventure..."

And to hell with sleuthing!

Sorry, my mind wandered off there for a second. Or am I the only one who sees sexy lesbian bondage overtones in the 1930 frontispiece illustration for The Mystery at Lilac Inn? (See the picture above.) Even twenty years later, when the books were updated, Nancy Drew was still tied up at the hands of the domineering jewel thief Mary Mason.

And then there's this 1939 scene from The Clue of the Tapping Heels. 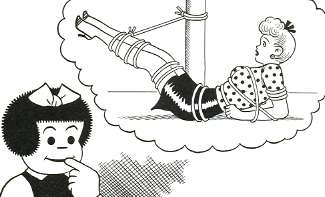 Still, I want to believe that even the most prudish reader would be curious about a chapter titled "The Man with the Whip." ("You saved me from a very unpleasant experience back there, Effie...") But the real moral of this story is that even in 1933, Nancy Drew kicked bad-guy ass.

"'Oh dear, this is something I don't know much about," the girl said in vexation. "How does one go about crippling an airplane motor?"


Maybe it helps to think of the books as antique children's pulp fiction...

The first Nancy Drew books were action-packed adventure stories ghostwritten by the first woman ever to receive a masters of journalism from the University of Iowa in 1927. Mildred Wirt Benson (under the pen name "Carolyn Keane") still remains an unsolved mystery, but it's obvious that she lived in a different world. Benson practically fell through time, according to Wikipedia, living for 97 years, from 1905 to 2002. And though she didn't write Password to Larkspur Lane, she is responsible for the The Mystery at Lilac Inn, which is often cited for another unfortunate anachronism in the original Nancy Drew series — racism.

In fact, the book's first three chapters are all about Nancy trying to find a substitute housekeeper when her maid goes out of town, with Benson writing that there's a "slovenly colored woman" who Nancy rejects (along with an "Irish woman," and a "Scotch lassie.") And in a 1930 Benson book, The Hidden Staircase, she uses almost identical language to describe the villain's maid — a "fat, slovenly looking colored woman". When Nancy sneaks in through the cellar window — and accidentally makes a noise — she brings the villain's maid downstairs to investigate. And then the maid says....


"I done reckons my old ears is playing me false. I hears noises dat sounds like dey was in de basement and dey was only in my haid."


Yes, Benson writes the maid's dialogue with the same dialect throughout the book. Later Nancy sneaks into a room in the hallway, and the villain's pet parrot starts squawking. The maid comes running, and Nancy hides in the closet.


"How comes you so excited to-night, talkbird?" the woman demanded crossly. "You carries on like a fool with all yo' squawkin' and speechifyin'."


And when the cops finally come, the maid holds them off with a shotgun.

To be fair, it was a long time ago. When Applewood Books ultimately republished these original texts in 1991, they added a preface with some soul-searching, acknowledging that "Much has changed" in America. ("The modern reader may be delighted with the warmth and exactness of the language, the wholesome innocence of the characters...but just as well, the modern reader may be extremely uncomfortable with the racial and social stereotypes...")

No matter how ugly these scenes are, the preface concludes, "These books are part of our heritage. They are a window on our real past." And all of these books were eventually re-written, though even those changes offer their own cultural clues.

But the changes also stripped away much of the gritty personality from the characters, reducing them to the bland action-hero stand-ins we know today, and making them more suitable for an ongoing series of massively-franchised children's books. In the original books, the Nancy Drew character was much more realistic, which explains the impact she had on earlier generations. USA Today even reports that on the Supreme Court, all three female justices cite that original Nancy Drew as an influence — Sandra Day O'Connor, Ruth Ginsburg, and Sonia Sotomayor.

But now the updated characters are so insistently good, they almost dare readers to invent their own sexy subtexts. In one episode of That 70s Show, Jackie insists on reading a Nancy Drew mystery out loud during a sleep-over with her boyfriend. ("Dammit." says Kelso. "Why do I always have to Bess?") And in 2004 the commenters at Something Awful even submitted their own sexy re-imagined covers for both Nancy Drew and Hardy Boys books.

The world's changed a lot, even if Nancy Drew hasn't. (If Nancy Drew is a lesbian, don't tell Pamela Sue Martin. In 1978, when she was 25, the TV actress who'd played Nancy Drew in the 1970s did a naked pictorial in the prototypical men's magazine Playboy.) I want to believe modern Nancy Drew writers understood this secret intrigue when they created a 1995 TV version. Its last episode ends with Nancy abruptly breaking things off with her boyfriend Ned.

"He was right. Our relationship is a mystery. But it's the one mystery I can't seem to solve..."

This year marks the 80th anniversary of the very first Nancy Drew books. But it's important to remember that no matter how quaint she started out, every once in a while, even those original old-fashioned Nancy books would still blurt out something so surprisingly progressive and modern, it'd make you want to cheer. For example, in the 1933 book Password to Larkspur Lane, Nancy tells her friend Helen to wear hiking clothes, since they're sneaking through the woods. I think this should be hung over the arch at the Nancy Drew School of Business.


"We are going to use strategy, but not charm, so put that frilly frock away."

Don't let anyone tell you how to behave — no matter what decade it is!