Sudoku puzzles have only one solution. And then directly above an easy-level Sudoku puzzle my local newspaper also published another grid-like math puzzle. "Try to beat today's challenge time..." the instructions begin.

But I'm here to tell you this puzzle has no unique solution. (And how I wasted two hours of my life figuring that out...)

Here's what happened: They left out a line of the instructions!

While the challenge is relatively simple — which numbers will add up to the given totals? — when the puzzle is syndicated newspapers are supposed to warn readers that there's multiple solutions, and that unlike Sudoku, there's not only one unique solution, but multiple ones. If you're thinking "This could be a 9 or an 8...." — you're right! Everyone's a winner today! Just start scribbling in numbers! And you'd be a fool to try to keep narrowing them down by, say, using your math and logic skills.

"Challenge Time," it says below my own local newspaper's instructions. "10 minutes and 12 seconds!" (Yes, they actually even specified how many additional seconds, after the 10-minute mark, you'd be needing to solve "The Challenger"...) And you can re-read the newspaper's instructions all you want, but you'll never find anything warning you off the impossible task of identifying a unique solution. In fact, turn the page and there's even one (and only one) "Puzzle Answer" provided. Implying, of course, that there is only one answer, and that you could somehow magically derive it, from your diligence and hard work, persistence and perseverance... 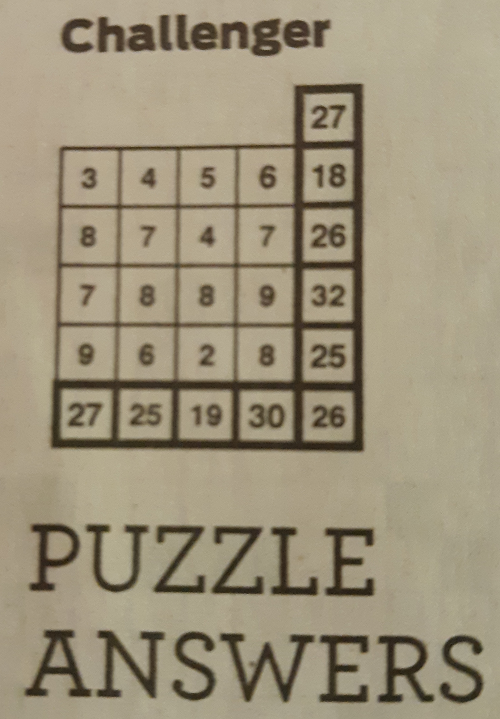 If you're looking for a unique solution, you can only win when you...stop looking and finally give up.

The lesson here, boys and girls: hard work is a futile and pointless time sink which ultimately ends in failure.

"So don't ever trust your local newspaper," I told myself. "These are the same people who think Marmaduke is funny...."

In fact, my only kind words today are for the stranger on the internet who relieved me of my burden after I'd given up in discouragement and searched the web for "How do you solve a Challenger puzzle."

Somewhere out there on the great wide internet is Dr. Robert J. Lopez, an award-winning former mathematics professor at the Rose-Hulman Institute of Technology in Terre Haute, Indiana. Fondly the emeritus professor describes how he'd assembled a computer program to explore the mathematics of "Challenger" puzzles. "The puzzle shown above has eight solutions," the professor writes at one point. 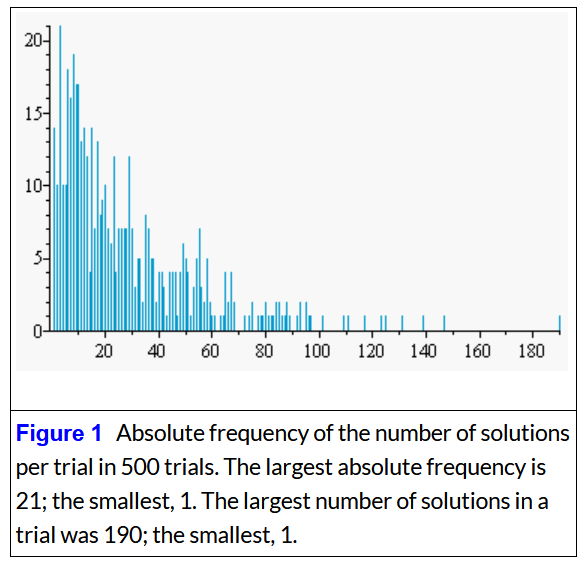 After hours of beating my head against the wall — trying to find a single solution which didn't exist — I'd found this kindly online math professor explaining casually that "Unlike Sudoku, the puzzle can have multiple solutions." And he adds that this fact "is explicitly stated below the directions, copyrighted by King Features Syndicate, Inc., that appear in my local newspaper." Gee, that would've saved me a lot of time — if my own newspaper hadn't left that out!

And of course, when you think about it, it's so obvious that there's multiple solutions. Because you could always get a second solution just by adding one to the second box's number and subtracting one from the number next to it — and then also subtracting one from the number at the bottom of the second column, while adding one to the number next to it. This is true for pretty much every puzzle combination (except when there's two nines, say, so you can't simply increase a digit by one.)

Judging by the professor's table, there's more than one solution for 97.2% of the puzzles!

Two hours. Yep, that's me. "Other people solve this, so why can't I?" I kept telling myself. For two hours...

"Apparently some people even find that unique solution in just 10 minutes and 12 seconds! Heck, it's in a newspaper! These puzzles get solved by bored retirees while they're sipping their tea!"

Yes, I'm probably too invested in my puzzle-solving ability. Growing up I'd always solved the Junior Jumble in my hometown newspaper. Now I can unravel anagrams just by looking at them, amazing my friends by shouting out words, one after the other... Imagining their amazement, I once even solved a Sudoku puzzle without using a pencil, doing the whole thing in my head. (I stared at the grid, and forced myself to keep re-identifying the numbers again and again until I'd completed a whole nine-number square, and then moved on to the next one...) Cryptoquizzes. Crossword puzzles. Those new-fangled Tic-Tac Logic puzzles. I've beaten them all...

But there's a trust. Your local newspaper is a part of your life — and so are those little puzzles on the funnies page. Maybe I felt like I was participating somehow in the larger community, like competing in a bar-room trivia contest. Maybe it's the secret national pastime — the local newspaper puzzle.

So what happens when they give you a puzzle that you just can't solve. Worse than that; that you can't even start! Two hours later, and not a single square filled in... Has the world gone mad? Is my mind rapidly deteriorating?

I had bad dreams. You know the one where you haven't studied for a test? But for me, the bad dream went on and on... So I failed that test. I had to drop out of college. I lived in a cheap apartment. I stole to survive...

There's a life lesson to be learned here, but I'm not sure what is. (Beyond "hard work is a futile and pointless time sink which ultimately ends in failure....") Maybe it's "Men wait too long before asking for help." Or "Don't ever let anyone tell you that there's only one way to solve a problem."

Perhaps it's "Seek help for your obsessiveness." Or "Find better uses for your spare time."

Or maybe the real lesson is that we truly do love those little puzzles in the newspaper.

And that they ought to honor and respect that love — by always providing the complete instructions.

4 thoughts to “When a Newspaper Publishes an Unsolvable Puzzle”