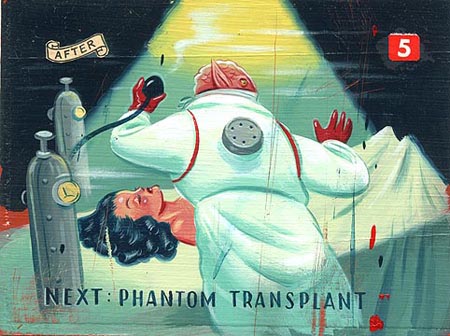 Hey there, First Worlder! Worried about bodily decay? If you're starting to notice the effects of beer, grease and couch-potatohood on your longevity potential, no need to wait around for human cloning. Emaciated slum-dwellers the world over are eager to sell the body parts you need to maintain your gluttonous Western existence as long as humanly possible. And thanks to the magic of warfare and endemic poverty, the cost to you can be less than treatment on a dialysis machine.

Sure, Turistas tells a morality tale of twisted Brazilian justice resulting from needs like yours, but hey — that's just a dumb splatter flick. Don't let its terror and graphic violence sway you.

"What you can get is the cornea — and often the whole eyes are removed — you can get skin grafts, you can get heart valves that are used in various operations, you can get pituitary glands, whatever," says Nancy Scheper-Hughes, a professor at the University of California, Berkeley, who studies the organ trade.

And that list only applies to corpses that are looted for organs in South Africa, Argentina and, most famously, China. For other items, such as the much-coveted kidney, you'll want to hook up with a live seller in Brazil, or even Iraq. But the real heavyweight is that notorious cesspit of human organ-farming — India.

On January 5th, the Indian national paper The Hindu ran a cover story about the gruesome killing of young children for their kneecaps! "[T]he bodies appeared to have been cut up by skilled hands. The person who cut up the bodies may not necessarily be a doctor, but was skilled enough not to damage the vital parts," Dr. Vinod Kumar was quoted as saying.

Nonetheless, don't think your quest for fresh bits will be an easy one. You'll want to stay under the radar of American do-gooders such as Scheper-Hughes and her Berkeley compatriot Lawrence Cohen. Staunch foes of the organ trade, they even try to put the kibosh on media reports they consider disrespectful. Cohen once ordered a journalist not to "write one more groovy story about how gross India is."

Unfortunately for Cohen, India really is gross. The country became famous in the mid-90s for a vigorous organ trade patronized by wealthy Europeans, Middle Easterners and Asians. In certain regions known as the "kidney belt," poor villagers regularly sell that organ. The Madras slum of Villivakkam is widely known as "Kidney-vakkam" due to the role organ sales play in the local economy.

India recently banned the organ trade, but that hasn't kept an entrenched class of brokers from continuing their operations on the black market. Visitors to Villivakkam can still see women with large, curving scars peeking out from under their sari tops. Residents of the slum may not know how to read or write, but they're savvy about blood types, tissue-matching factors and going rates.

Those rates are hard to pin down thanks to the black-market nature of such sales. One estimate puts the profit at $10,000-20,000, of which the broker takes a cut of about $6,000. Another puts the seller's take at more like $1,000. One of the most common uses for the money is to fund that other emblem of Third-World backwardness, the dowry. In many "kidney belt" villages, Cohen says, it's common for girls to go under the knife in exchange for dowry money.

Still, it's hard to peg the number of people selling organs. The Voluntary Health Association of India estimates that more than 2,000 people in the country sell their organs each year, but that figure defines "sale" to mean "exchange for money." Countless other transactions are "soft barters," with body parts being traded for some vaguely-defined reward.

"They aren't asking for a fixed fee, they're asking, maybe, for help with getting a daughter married or help with buying a house or a down payment or some other form of exchange," Scheper-Hughes says. She encountered one case in which a woman donated a kidney to her wealthy uncle in exchange for a fancy suburban home.

So how is an out-of-towner supposed to hook up with a donor? The Internet might seem an obvious research source, but would-be online brokers — such as the individual who recently attempted to peddle his kidney on eBay — are quickly traced and shut down. Instead, you'll want to scan Brazilian newspapers for classified ads placed by people claiming they want to be of help. "People say they're willing to be anonymous donors and that they want to be helpful," Scheper-Hughes says. "That's the language that's used, but often what that really means is [they want money]. Very few people who are poor really want to be anonymous donors."

In India, you can try a more direct route — simply visit a clinic and ask if the doctor knows anyone who can hook you up with a donor. Throughout the '90s, journalists found that the most casual inquiries bore immediate fruit. This method doesn't work in Brazil, but you can at least rely on the transplanting surgeons not to ask too many questions about your donor. Which isn't to say they won't wonder.

"I don't want to know what kinds of private exchanges have taken place between my patients and their donors," one Brazilian doctor told Scheper-Hughes. "But obviously you do have to suspect something when the patient is a wealthy Rio socialite and her 'donor' is a poor, barefoot 'cousin' from the country."