It's easy to hate Christmas: the endless forced good cheer, the media-driven consumer frenzy, the It's a Wonderful Life fantasy dissolving into a Married... with Children reality.

But no matter how bad your holiday is, rest assured that it could have been far worse.

1. Family Discord.
Home was definitely not the place to be for the family of R. Gene Simmons of Dover, Arkansas in 1987. The clan was rapidly becoming estranged from the family patriarch. Even his favorite daughter, who had borne him a son, had run off and gotten married. It was time for revenge. As each contingent showed up at the dilapidated family mobile home to try to put a happy face on for the holiday, Simmons shot the adults and strangled the children. By Christmas Day, he'd wiped out almost three generations of Simmons, 14 all told. It was the worst family slaughter in American history.

But wait — he wasn't done yet! For an encore a few days later, he went on a shooting rampage through a few former places of employment. He killed two people and injured four more before surrendering to police. He later became the first man executed by lethal injection in Arkansas.

2.The Season of Not Giving.
The holiday-fueled impulse to eradicate one's family isn't limited to the dysfunctional trailer park crowd. H. Sanford Williams was eminently respectable, having been an Army Chaplin, a Methodist Pastor, and finally the head of a charity, the National Retirement Foundation. Alas, the season of sharing had been a bust donation-wise and his foundation was in serious trouble. On Christmas Eve in 1957, the St. Petersburg, Florida man shot and killed his wife and two sons before turning the gun on himself.

3. Xmas Pageant Inferno.
It was the climax of the 1924 Christmas Eve pageant at the Babb's Switch, Oklahoma one-room schoolhouse. The last recitation had ended, the last carol faded. Now Santa himself was handing out bags of candy to all the children. But oh no! Santa brushed against the candle-lit tree. Within minutes, the room was a seething inferno, with 200 men, women, and children trying to force their way out the only exit: a door that opened inward. Thirty-four people died. But thanks to the heroic efforts of Santa and the schoolteacher (both of whom were themselves incinerated), only five children were among the dead.

4. The Deadly Christmas tree.
The substitution of incandescent lights for candles didn't eliminate the tendency of Christmas trees to turn into pyrotechnic yule logs. One of the deadliest of these modern-day holiday firebombs was Niles Street Hospital's 1945 tree. When a nurse unplugged the tree lights on Christmas Eve in the Hartford, Connecticut convalescent hospital, a spark ignited the dry needles. She grabbed a fire extinguisher, but panicked at the sight of the roaring flames and fled. Not only did she not even bother to call the fire department (neighbors, woken by the crackling flames, summoned them several minutes later), she left the front door open to properly ventilate the blaze. The building was completely gutted, and 15 patients and two staff died.

5. The Lethal Midnight Mass.
Christmas Eve midnight mass in Temoaya, Mexico in 1953 had just finished. Three thousand worshippers were peacefully filing out when someone tripped over the wrong wire. There was a bright blue flash, and then total darkness. All sense of peace and goodwill toward men vanished as the crowd transformed into a panic-stricken mob stampeding from the sanctuary. By the time the lights came on a few minutes later, 23 people were dead and over 200 injured. 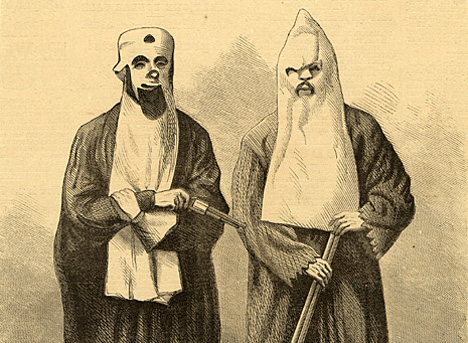 In many ways, Thanksgiving is an un-American holiday. Consumption seldom goes beyond an excess of turkey and pumpkin pie, and garish displays are limited to a few stupid parades and some of the most mediocre football of the year. Good old all-American chaos is down — but not entirely out.

Priscilla Ford had a long history of psychiatric problems and bizarre behavior, marked by such quixotic acts as suing the Mormon Church and attempting to speak at the 1972 Republican Convention. The capper came on the Thanksgiving afternoon when she got even with the City of Reno. In front of the downtown casinos, she steered her black 1974 Lincoln onto a crowded sidewalk and mowed down the crowds of holiday gamblers and gambolers. She left six dead and 23 injured in her wake. Pulled over a few blocks later, she told police, "Sometimes I am called Jesus Christ." She later expressed a fervent hope that she'd nailed 75 people, and explained the voice of Joan (Mrs. Edward) Kennedy had told her to do it. Nonetheless, she was found legally sane and duly convicted of murder.

At 35, failed preacher William Simmons had found his true calling as a fraternal lodge leader. In addition to commanding five regiments of the Woodmen, he was a heavy in several Masonic orders and a Knight Templar. But his dream was to have his own personal fraternal organization. And he wanted more than funny hats and secret handshakes — he wanted to revive the Ku Klux Klan. His dream came to fruition Thanksgiving Eve when 40 handpicked men gathered to re-launch the Klan. A group of 15 stalwarts recessed to the top of nearby Stone Mountain for an early morning cross-burning. Simmons tied his first recruitment drive in with D.W. Griffith's famous film The Birth of a Nation, which opened in Atlanta the following week. And the rest, as they say, is history.

Back in the good old days of Thanksgiving Day football, the hearts and minds of Bay Area football fans were not on dinner, but the day's "Big Game" between the University of California and Stanford. The 1900 edition of this classic was, of course, sold out. The roofs of the buildings surrounding the stadium were crowded with budget-minded fans craning for a glimpse of the action. Twenty minutes into the game, the roof of one building collapsed. Unfortunately, the building housed a glass factory, complete with a red-hot furnace filled with molten glass. Turkeys weren't the only things getting roasted in San Francisco that day. Twenty-two people were killed and over 80 injured in what remains the worst — and most bizarre — disaster ever to befall American sports fans.

Early on Thanksgiving morning, Marxist Zimbabwean rebels descended on two farms run by white Pentecostal missionaries. What they lacked in Thanksgiving spirit they made up for in their revolutionary zeal. First they tied up the 16 white missionaries — men, women, and children, including two Americans. Then, as they gleefully sang revolutionary songs, they hacked their captives to death. Officials could only describe the resulting carnage as "barbaric."

At the height of the Argentinean urban terrorist fad, a band of 15 young men waylaid John Swint, the general manager of a local Ford subsidiary, on Thanksgiving Day. The Peronist gunmen, upset with the way President Juan Peron had turned on them, later claimed they'd only wanted to kidnap the American executive. But according to witnesses, it was a turkey-shoot from the get-go. The gunmen immediately started blasting away with shotguns and assault rifles, killing Swint's bodyguard and chauffeur and critically injuring another bodyguard. One blond gunner unloaded a quick machine gun blast into Swint's body at close range — just to be sure.