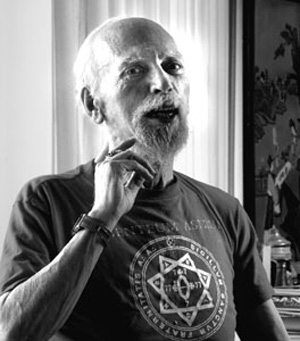 I was prompted by yesterday's news of the passing of RAW to scan the pieces he wrote for his 1999 column on GettingIt.com, the progenitor of this webzine. It was a casual act, under the assumption that they would be somewhat dated. But as I reread the articles, it became clear that admirers who are unaware of them might in fact find them enjoyable.

So, here are their links, with excerpts:

Coming Again: The orgasmic release of the Apocalypse myth

Sometimes, the Apocalypse can ruin your whole week.


[T]here may be more here, just as there is to horror and catastrophe movies if you think about them. Neo-Freudians, and especially Reichians, suggest that our form of civilization stifles and constricts us so much that at times we all long to experience some orgasmic but catastrophic "explosion," like King Kong breaking his chains and wrecking New York, or even more like the masochist in bondage, according to Dr. Reich. This sudden release from the bondage-and-discipline of our jobs and our taxes — actually called the Rapture by Fundamentalists — seems ghoulishly attractive to Christians, New Agers, and others who believe in a "spirit" that will survive the general wreckage. In that case, the end of the world seems no worse than a visit to the dentist: You know you'll feel better afterwards. This sort of desire for Total Escape/Total Annihilation has always had its bards and visionaries.


Reality Ain't What It Used To Be: Thirty-five years after Bell's Theorem

Sounds like Zen to some, but others fear this is opening the door to Dr. Berman's solipsism and the moon that is only there when we look at it...


In my own (hazardous) attempt to translate Bell's math into the verbal forms in which we discuss what physics "means," Bell seems to prove that any two "particles" once in contact will continue to act as if connected no matter how far apart they move in "space" or "time" (or in space-time). You can see why New Agers like this: It sounds like it supports the old magick idea that if you get a hold of a hair from your enemy, anything you do to that hair will affect him.


In Doubt We Trust: Cults, religions, and BS in general

Can we actually "know" the universe? My God, it's hard enough finding your way around in Chinatown. — Woody Allen


I have no commitment to materialism as a philosophy that explains everything, since no correlation of words can ever do that, and a philosophy is never more than a correlation of words. But restricting myself to the "materialistic"/scientific method of asking questions that have definite experiential answers, I observe no difference in operation between "cults" and "religions." Catholic nuns and priests vowing celibacy seem no more or less weird than Heaven's Gate members who also make that choice. Mormon extraterrestrial cosmology seems as goofy as Scientology, etc. Religions and cults all use the same techniques of brain damage, or "mind control," i.e. they all instill BS — Belief Systems.


The Lumber Of The Beast: Tracking the Antichrist

Did you know that Bill Gates is the Antichrist? Well, you've probably suspected it, but some people have set out to prove it...


Among the fundamentalists, the Antichrist is always considered a specific individual appearing only in the last days of Earth. Recent candidates have included Aleister Crowley, Yasir Arafat, Prince Bernhard (founder of the Bilderbergers!), Henry Kissinger, Saddam Hussein, Mickey Mouse, Barney the Dinosaur, and even Ronald Reagan — whose full name, Ronald Wilson Reagan, has six letters in each word, thus yielding 6-6-6.

Although few people remember this, Bugs Bunny was the first UFO "abductee" in a 1952 cartoon called "Hasty Hare."


Imagine what would happen if "many millions" of U.S. citizens said they had been sexually assaulted by aliens from Mexico or Iraq, instead of aliens from Outer Space. Obviously, there would be no scientific taboo against investigating such cases, and Congress might even have declared war on the invaders by now. If the subjects claimed, as most of Dr. Mack's subjects do, that they now love their kidnappers and have received important ecological warnings from them, as well as learning from their extraterrestrial sermons about how wicked and wretched our society is, this would be considered evidence that they had been "brainwashed" as well as raped (think Stockholm Syndrome). The differences in scientific and political reactions to atrocities by human aliens and nonhuman aliens seem even more confusing than the rest of this mystery.

Or, worse yet, is it possible that Daffy Duck is the Devil? Keep an eye on your local media for further Feminist or Fundamentalist revelations.


In 1997, a jury awarded $2.4 million in damages to one Nadine Cool, who had sued her former therapist, Dr. Kenneth Olson, for malpractice. He had convinced her, under hypnosis, that when she was a child her father had forced her to participate in Satanic rituals of human sacrifice. He also convinced her that she possessed no fewer than 126 alternate personalities, including angels, demons and even a duck. She had believed it all — including the duck — until she confronted her father with these hideous memories and he dropped dead of a heart attack.


The Devil On The Chimney: A tale of Lovecraftian horror and psycho-archeology


As Weston La Barre pointed out a long time ago in his classic Ghost Dance: The Origins of Religion, you can find remnants of a primordial bear-god from the bottom of South America up over North America and over the North Pole and down across most of Europe and Asia. This deity appears in cave paintings from southern France carbon-dated at 30,000 BC. You can find him and her (for this god is bisexual) disguised in Artemis and Arduina and King Arthur, all unmasked via canny detective work by folklorists — and etymologists, who first spotted the bear-god when they identified the Indo-European root ard, meaning bear. You can track the bear-god in dwindling forms in a hundred fairy tales from all over Europe and Asia. And you can find the rituals of this still-living god among the indigenous tribes of both American continents.


See Also:
Robert Anton Wilson 1932-2007
Neil Gaiman Has Lost His Clothes
When Cory Doctorow Ruled The World
Thou Shalt Realize The Bible Kicketh Ass
Is The Net Good For Writers?

6 thoughts to “A Selection of Obscure Robert Anton Wilson Essays”