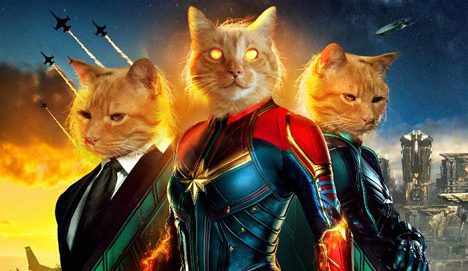 A funny thing happened when I searched Amazon for the soundtrack to Marvel's upcoming superhero blockbuster, Captain Marvel.

It has 0 reviews, but Roguey's received three disparaging reviews for his other offerings in Amazon's digital music store. ("Too short, only 30 seconds. WTF...")

In fact, his entire "recording" career seems to span 10 weeks in the summer of 2018, releasing 53 songs -- all of which are 28 seconds long. Most of them have titles that look like popular songs from popular movies -- for example, "Waterloo (From Mamma Mia! Here We Go Again Soundtrack)" -- but the songs themselves sound very suspiciously like sound clips. Another example: his 29-second song "Rubber Band Man (From The Avengers Infinity War Rubberband Soundtrack)" is indistinguishable from the original 1976 song by The Spinners.

And he's not the only one in Amazon's digital music store selling musical knock-offs. There's also an enterprising musician peddling a track called "Music from the 'Captain Marvel' Movie Trailer - Cover Version" -- which appears to be a wholly unauthorized synthesizer recreation of whatever's playing in the background of Marvel's trailers for their upcoming film.

So I can't be the only one who's now wondering which songs will be featured on the film's official soundtrack.

But interest really spiked when Marvel unveiled the official Captain Marvel web site -- which was done in a deliriously retro 1990s style. (Wired said it paid homage to those glorious early years when the internet was "glittery and welcoming and amateurish and wonderful and absurd.") It reminded everyone that Captain Marvel is set in the 1990s -- just like Marvel's Guardians of the Galaxy begins in the 1970s. And that soundtrack, with its collection of '70s super-hits -- went on to become the fifth best-selling album of 2014, selling over 2.5 million copies worldwide and grabbing the #1 best-selling album spot on Billboard's chart -- the first time in history that the #1 album has been a soundtrack with nothing but other people's previously-released songs.

Would Captain Marvel's soundtrack do the same thing for music from the 1990s?

Imagine her impressing the hell out of S.H.I.E.L.D. agent Nick Fury to the tune of the Breeders' "Saints", or fighting shape-shifting skulls to the insinuating vocals of Veruca Salt's "Seether".

Yes, I rushed to look up the track listing on the yet-to-be released Captain Marvel soundtrack.

And all I found was some crap by a guy named Roguey.

UPDATE: The movie's been released and it did feature many songs from the 1990s, including:


Unfortunately, as of yet they haven't been gathered together into an official "Music from Captain Marvel" album.

One thought to “The Great ‘Captain Marvel’ Soundtrack Scam”