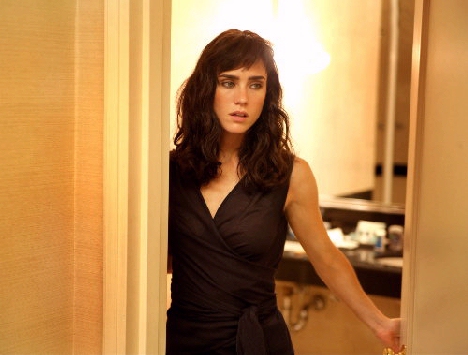 It was nominated for three Oscars, and won: none. Little Children dramatized Tom Perrotta's brilliant novel about suburban entrapment (and the possibility of escape). Was something lost in its transition to the screen?

Perrotta, along with director Tom Field, condensed his book's seven characters into movie-friendly vignettes. Even though their screenplay was nominated for an Oscar, it inevitably raises questions about what was left out — and why. Are book-reading audiences more liberal than mainstream movie-goers? Were some scenes too hot for Hollywood — or just too complicated?

Warning: this article is full of spoilers. Lots of 'em.

When the film opens we see Kate Winslet playing an unhappy housewife at the playground. But in his book, Perrotta indulges in a glance at the life history that brought her there. An active feminist in college, she'd found meaning and self-discovery in a college Women's Studies program, ultimately enjoying "a passionate affair with a Korean-American woman named Amelia."

This digression leads to a scene which adds a crucial perspective to her future unhappiness. By page 12, Perrrotta has breezily recapped her failed grad school career, fretting that the best possible outcome would be "a one-year, nonrenewable appointment teaching remedial composition to football players in Oklahoma." She returns to a low-paying service sector job — at Starbucks coffee — where one day she spots her former lover, looking "absolutely radiant," with her husband and baby.

"Amelia shrugged, as if she didn't understand how it was possible that she even knew this pathetic woman in the green apron, let alone that they'd once danced to Aretha Franklin in their underwear and collapsed onto a narrow bed in a fit of giggles that seemed like it would never stop."

That year — and while working at Starbucks — she meets her future husband Richard.

It's at Beachfest 2001 that he calls his wife and tells her that he's never coming home.

This changes the dynamics of the film's crucial moment on the playground, when his wife must also grapple with the fact that she doesn't have a husband to go home to.

His wife and he are devout Catholics — though he'd met her at a Miss Nipples contest at Kahlua's. After his own tragedies — the mall shooting was followed by the death of his father — Larry decides that "horrific things happened to good and bad people alike with no regard whatsoever for their goodness or badness." His Catholic beliefs evolve into some more profane. "[I]f some kind of God was in control of it all...then God was an asshole or at best an incompetent, and in either case was of absolutely no use to [anyone] who simply wanted to live a decent life..."

The mall shooting leaves him impotent, but it's his sacrilege that causes his wife to consider leaving him. Their final argument was ultimately about "a cleavage-baring dress she'd worn to mass during the July heat wave." During the week his wife wore the same nurse's uniform, and wanted Sunday to be a day when she looked nice.

After their separation Larry watches her bitterly at church, dressed "as if Dirty Dancing was the Eighth Sacrament." Which ultimately leads to a startling scene.

The Pedophile Among Us

Jackie Earle Haley was nominated for an Oscar for his portrayal of the unreformed pedophile. But in one of the book's most outrageous scenes, the character's ever-faithful mother actually convinces him to go to church. ("Say a prayer for your old sick mother.")

There, inevitably, he's spotted by Larry, the now-relentless neighborhood activist. The moral-minded community has already identified the disturbing pedophile in their midst — "whole families fleeing pews" — but Larry watches his estranged wife sitting blithely with their children. "Just two feet away from that shitbag!" Larry announces. Tension builds throughout a sermon about how Jesus loved everyone — but Larry finally loses control, confronting the smiling pervert and trying to eject him from the church.

The congregation watches as he attempts to pull him from the pew, the pedophile crouching and clutching the kneeler. Ultimately he succeeds only in pulling off his pants — revealing "the blasphemous pallor of his butt cheeks."

The film's plot centers around the forbidden attraction between a married woman and a married man. Their rebellious passion comes as a surprise, with only an intriguing outline of their motivations. But the novel grants the reader a look into Brad's pscyhe.

Named Todd in the book, he's still the neighborhood legend, dubbed "the prom king" by the housewives at the playground. He's a good-looking, stay-at-home dad who boyishly can't resist midnight football games or the cajoling of skateboarders. But Todd remembers the day his personality was frozen. ("The afternoon his mother died, Todd and his friend had been throwing snowballs at cars...") When his father comes to inform his son somberly about his mother's death, Todd asks "Is this about the car?"

"Did someone tell you?" his father asks?

The moment now hopelessly confused, he eventually tells his son "I want you to live your life as if this never happened." Todd plunges ahead with relentless adolescent success, falling into a pre-law career almost by accident (taking the LSAT as a show of support for a fraternity brother). The book savors his grown-up dilemma — and that of his career-minded wife Kathy, trying to hang on to her ideal husband.

"I don't know," Brad answers honestly. "That's what I'm trying to figure out."