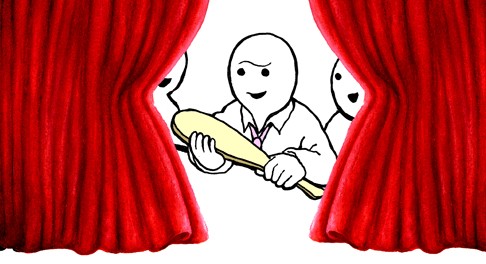 It's startling, it's funny, it's disturbing, and it's brilliant — and always with deceptively-innocent titles like "Hugbot," "Colonel Sweeto," or "Weeaboo."

Nicholas Gurewitch finally agreed to pull back the red curtains of his mind and share some secrets (and some unpublished art) with his beguiled fans.

The 25-year-old cartoonist created a web phenomenon with his comic strip The Perry Bible Fellowship, where there's always a new storyline, and often even a new style. I spoke with Gurewitch about his work and his forthcoming book, The Trial of Colonel Sweeto and Other Stories.

LOU CABRON: Can you explain some of the mystery away? Tell me something I don't know about The Perry Bible Fellowship.

NICHOLAS GUREWITCH: I hide a lot of things in the comic — details that I hope resonate with people when they read things for the second and third time. I do love planting things like that...

LC: I was just proud that I'd spotted that same curly line in the Masculator strip last week that was in your first strip six years ago, Stiff Breeze.

NG: It might be the same breeze in all these strips! I think it might be God messing with people. 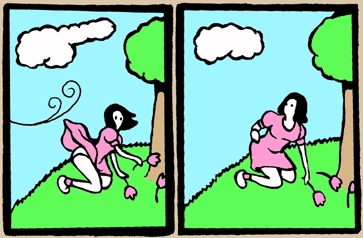 LC: Your first comic also had a hidden phallic shape in the clouds...

NG: That may have been a very formative one — the comic that determined the persona of The Perry Bible Fellowship.

That one was kind of created by accident, but most of the comics that followed seemed to get their power by hiding something. I got high off the fact that some people noticed it and some people didn't. It almost made the people who noticed it feel more privileged.

I think I've been trying to appeal to that ever since...

LC: Now I have to know — what else have you hidden in the strips?

LC: Wow! Can you give me any other examples?

NG: I think you can see in the comic strip The Other Girls — with the vampires... I might rather avoid giving too many clues.

I don't generally do celebrities, but I've had a lot of people accuse me of planting ex-girlfriends in the comics. (Laughs)

LC: So what do you say to that?

NG: I think you've got to shrug it off.

LC: So you're not drawing your ex-girlfriends into your comics?

LC: Your strip No Survivors had a weird backstory. It shows a man spelling out "Marry Me" with the corpses from a plane crash. You told Esquire that you'd ended a relationship with "a very gorgeous girl," and were trying to convey your sadness to her!

NG: I just found my situation very comical. I don't think it's a coincidence.

LC: So could the Perry Bible Fellowship cartoonist ever dream up a strip that was just too strange? Ever have an idea that was too far out to publish?

LC: But in your FAQ you've also said some strips aren't online because they're "not meant for the internet."

I put a bunch of these lost strips in the book that's coming out. There's a whole section of the book devoted to comics that have been supressed from public view. There are a couple that are overly offensive that are in the book. I've hidden a few things in there...

NG: Sure - here's the first frame. 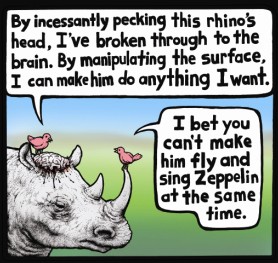 LC: One of my favorite strips is Cave Explorer — where a man builds a couch-cushion "cave" to trick his son into getting on the school bus.

NG: That's something that eveyone does, every day, in small little ways. I don't think everyone does it that literally, but we're constantly manipulating children. So to see it done very visibly, and in an enjoyable way, is almost kind of — it throws a wrench in our conception of ourselves.


LC: Does this mean your parents tried to trick you like that?

NG: I don't think we ever set up "Cave Explorer." But any parent that tries to outsmart their child to get them to do something is kind of engaging in this activity. If they try to get the kid to think about a new topic or they mention something advantageous about school that day — any time they cut a corner when they're parenting.

LC: Laughing Squid spotted something apparently based on another of your comic strips, Nice T-Shirt. Someone's selling "Avenging Unicorn" action figures, "with four interchangeable horns that can be used to impale a mime, a new age/hippie girl and a business man."

NG: I always thought that was really bothersome.

NG: What I took from what it was that person had probably seen the "avenging unicorn" comic that I did. And I think the giveaway is that there was no reason to think that the unicorn was extracting vengeance on any of the people he was supposed to impale.

Also, the fact that a mime actually has something go through his chest seems reminiscent of The Perry Bible Fellowship archive again. I did one where a mime gets hit in the chest with a bullet. (There's also their "Unicorn Power" chewing gum, which is even more bothersome because it looks so tasty.)

I had some people telling me — wondering if I was getting a cut of the profits from them.

NG: I think I just got a little sad for a day, and left it at that.

LC: Sad? Was it that far from the original comic strip?

NG: I thought they missed it entirely. The toy almost comes off as mean-spirited. What bothers me about the toy is that there's no reason to think that any of those people should be punished.

The comeuppance in the comic is entirely appropriate. I think the beauty of the strip is that there are unlikely protectors out there. The boy wearing the shirt doesn't even bid them to do it. I think it's just the nature of the unicorn to protect the person who wears their mantra. And I adore the fact that the bully absolutely deserves what he gets.

Food Fight and the Fans

LC: Do your strips get any other weird reactions from readers?

NG: This one kid thought I was enjoying the guy who yells "food fight!" in the Food Fight comic strip.

I despise that man! I don't think he realized that. I hate him with all my heart. Seeing him in action is something I find extremely amusing...

There's almost always a punishment element to these terrible people in the comics. It's not just badness for badness's sake. People don't see the bigger picture a lot of times. They see something bad and they think it's automatically endorsed. I condemn a lot of the characters in my comic strips.

LC: Do you ever get people complaining that "This strip wasn't as funny as that strip?"

NG: That's a really common review. I think a lot of people think the comic is slipping lately.

But I think people have been saying that since the first six strips came out in college my freshman year. I had my roommate saying, "These new ones are okay, but you'll never get back to that first semester." It's been that way every step of the way.

I laugh at it just as much as I always have.

NG: I've learned to make really quick and vague replies that make them sorry for asking.

I had a really long dialogue with someone who wrote in who was quite disgusted. He said he couldn't figure out how I thought certain things were funny — that there was no excuse for thinking that someone's death could be funny. He was particularly disturbed by the comic Hey Goat, where the last frame indicates an avalanche and a skeletonized couple next to the goat. He said there was no reason that could ever be funny.

LC: What did you say?

NG: I basically apologized and let him know where I was coming from. I think my explanation to him was that in that case, I thought it was very funny that his downfall — his fate — was determined by something absolutely unnecessary. It's pretty frivolous to yell at a goat and let him know that you're in love. I really like the idea that that was his undoing.

By the end of it, we were pretty friendly. We realized it's impossible to know anyone's intentions without meeting them in person. It was something really nice like that.

LC: I have to ask you — where did the title come from?

NG: My buddy and I were just looking around his room and he had a poster on his wall of this traveling singing group. And they were performing at the Perry Bible Fellowship. They were called the Hyssongs.

He actually framed it and gave it to me as an apartment warming present a few months ago.

The poster — it would be embarrassing to anyone who owned it.

That's them — but not the same image.

LC: So when people ask you about the title, what do you think?

NG: I think, a mental sigh. And then I proceed to try to cover up the fact that I'm not sure that there is a very good reason why the comic strip is called that....

LC: How many emails do you get, anyways?

NG: It varies quite a bit. But there's one instance that really gave me an idea about the crowd that was waiting for each update. I'd published online The Throbblefoot Aquarium. I was blown away with the fact that within five minutes of posting, I had received 20 similar emails — appreciating the parody of Edward Gorey.

It's tough to figure out. I get the impression that people think I get a lot more email than I get.

LC: Do you want more?

NG: Everyone says, "I'm sorry for loading up your inbox. You must have a thousand of these." I do probably get more email than I'm comfortable with. I think I have a few from last May that I need to respond to...

I want to respond to all of them. Sometimes I just don't know what to say, so I put it off for another day.

LC: What's the strangest reaction you've ever gotten from a fan?

NG: Every once in a while, I'll get a piece of fan mail that touches my heart. The other day a young lady sent me an envelope full of grass. It had little to no explanation along with it, but it was nice to receive. It was strange encouragement.

LC: Did you write back?

NG: There wasn't a return address.

LC: So after six years of strangeness, do you have a message for all your fans?

NG: We're in this together

5 thoughts to “Secrets of the Perry Bible Fellowship”