Hours after the upheaval at Valleywag, recently-released blogger Nick Douglas issues his first comment. In fact, in an effort to learn the truth, we talked to all the players — Nick Denton, Nick Douglas, Rocketboom's Andrew Baron and Amanda Congdon, and even Dave Winer. 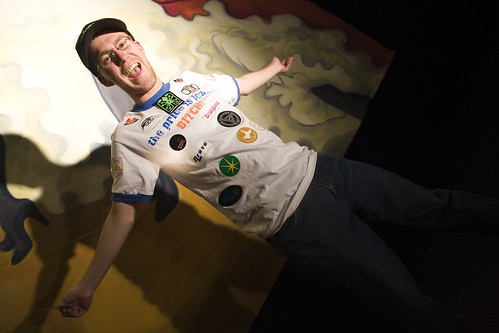 Our story so far: Gawker hired Pennsylvania college student Nick Douglas in February to pen sexy gossip about Silicon Valley — until Monday, when Gawker's publisher Nick Denton took over the writing duties himself. Monday night blogger Douglas made a surprise appearance in the comments of that thread — but only to heckle commenter (and blog publisher) Jason Calacanis.


JasonCalacanis: Someone tell little Nicky that I have a job for him running NickDenton.net: all Denton all the time.

NickDouglas: Jason, calling me "little Nicky" is an AWESOME way to make me consider a professional relationship with you.

Was Douglas still considering new professional relationships? With snark flying in all directions, and the gossip columnist suddenly gossip fodder, we decided to track Nick down ourselves.

Let's start with where he's not. "I'll be 'on tour' until January 2, 2007," his cellphone told callers Monday, and — in case you're missing the hint — the voicemail message adds, "I'll be returning to the U.S. on January 2." But just last week he was spotted at a San Francisco Web 2.0 conference, and his Upcoming.org profile shows him attending a San Francisco party this Saturday.

"I'm working on a project," he'd told us in an interview published 11 days ago. "There's a sort of video news thing that I'd love to do..."

So theory #2 begins when Dave Winer posted a month ago that Douglas "was leaving Valleywag to do a web video show with one of the big video producers." We'd specifically asked Nick about the rumor.

"First off, I'm surprised that — if Winer is still blogging — that anyone reads him," Nick replied saucily. "And secondly, I'm surprised that people believe him!" Nick responded to Winer's post by saying cryptically that "Rocketboom is hiring, and so there are always rumors about that," adding that, "I'm working on a project..."

Ah-ha! Maybe Nick struck a deal with Rocketboom, the reputedly popular video blog. Monday we tracked down the site's creator Andrew Baron, and demanded that he spill the beans.

"Are you kidding?" he answered dismissively. "He hates Rocketboom."

Putting two and two together, we deduced that Nick may have struck a deal with former Rocketboom correspondent and producer Amanda Congdon. She recently left the popular video blog to create her own online video shows. So we located Amanda Congdon, who answered our query with an emphatic: no.

But in our earlier interview we'd learned significantly that Nick had at least reviewed the current online video offerings, and concluded, "There's not really a show out there yet for your average person who goes to Yahoo as their home page... The typical example is your mom, right, or the average guy on the street... There really needs to be one show that comes out that is like The Daily Show for the internet. I think if one show came out that was half as witty, and probably shorter — that would be good."

"If I did anything in video, it would probably be something short like that."

One commenter on Valleywag hinted (without evidence) that Nick may have gotten a deal with Adam Curry's Podshow network....

Enough is enough! We demanded Nick send us a comment — and sensing our frustration, he obligingly complied, although speaking in tantalizing gossip-columnist koans.


My only on-record comments are:
"I still like Nick Denton."
"I'm wide open for job and gig offers."

Sometimes the truth lies between the lines. But does this mean the blogger didn't leave the site because he'd already lined up a juicier gig? Our own network of sources tell us Gawker's publisher (Nick Denton) was already looking for a replacement writer last week.

There was only one thing to do. We asked Denton for the other side of the story. Late Monday he mailed us a comment, offering his own tight-lipped perspective on the incident.

"Valleywag was growing," he conceded. "But there's a bigger audience for tech news and gossip than we had tapped." But did he fire Nick? How was their relationship over those last months?

"Not saying anything more about Nick Douglas," he huffed, adding: "I think he may move to Wired."

Wired? Did Nick Douglas leave the Gawker media empire for Wired? At this point we realized there was an even bigger question. Was Nick Denton giving us firsthand information — or just repeating a rumor he read on someone else's site.

No matter how much you think you know, there's someone who still knows more. We asked Dave Winer today how he'd known Douglas was leaving over a month in advance, but he wasn't telling. "No comment on how I knew," he wrote, "other than I had an anonymous (good) source who shall remain anonymous." But he did offer his last thoughts on Nick's tenure at Valleywag. "I think overall Douglas did a good job."

Supporting sentiments echo from around the web. "I'm sure wherever Nick ends up next will have a similar rebellious feel," one blog commented, adding "i'm looking forward to signing up as a daily reader for the new gig, whatever it might be..."

The positive sentiments were echoed by Valleywag contributor Paul Boutin. He confided to us that he feels Douglas "is exceptionally talented, has a bright future, and most important he's nowhere near as mean as he pretends to be on Valleywag." (Adding that he was sure Gawker publisher Nick Denton feels the same way.) Sensing that his words would be carefully scrutinized, Boutin hinted only that "I think the enterprising Mr Douglas needs to join an A-team where he can get some direct mentoring rather than working alone. Wired did that for me when I first started writing and it made all the difference."

Meanwhile, Valleywag limps on. Over on the site, publisher Denton had mumbled the news Monday morning in a short blurb. ("Some changes, today...in design, personnel, and mission... Nick Douglas, editor since launch earlier this year, is leaving. And we're going to change the mix of stories, slightly.") With only a few additional remarks in a longer hyperlinked entry, Denton found his announcement receiving negative reviews.

"[Y]ou can do better than that," one reader complained in the comments, joining a mostly-negative chorus of 53 responses to the news. Another poster speculated that the Gawker publisher had been pushed to fire Douglas by a powerful Silicon Valley company like Google or Yahoo. And others simply carped about Denton's new look for the site. ("With all due respect, I am unthrilled with the new design." "IBM just called from 1955, they want their Courier font back.")

Denton promised he'd address all the comments by Monday evening — but then failed to show up. "I guess that plan didn't work out," posted technology blogger Thomas Hawk, agreeing that Denton should roll back his unpopular new design and give a better reckoning of his plans for Valleywag. But by Tuesday morning Denton was back in the thread, acknowledging the design criticisms, but saying he'd leave the mystery of Douglas's fate as something for Douglas to address. Although he did offer one last piece of gossip. "I know he's already had a few job offers."

Denton has already offered hints on the site's possibly-less-interesting new direction. "We're still going to break open secrets," he blustered in his Monday post. "However, I suspect we're going to tone down the personal coverage of civilians, because they haven't done anything to seek out attention, and their personal lives aren't that interesting. Unless they are." The site's new mantra for gossip?

In Silicon Valley, personnel shuffles are just part of the territory. But after 9 months of dispensing trashy beat-downs to the tech industry's climbers and its falling stars, Nick finds himself at the center of a poignant irony. Even his targets seem to have recognized that it's all just part of the game.

Despite Nick's nasty commentary about Rocketboom, their former correspondent Amanda Congdon couldn't end her email to us without adding one last thought.

That was where the story ended — until suddenly Tuesday afternoon, when Nick re-appeared on Valleywag like a Silicon Valley ghost.

Saying everything, saying nothing, he performed the traditional Gawker good-bye dance. "I don't have anything to get across, other than that I'm free for lunch and gig offers for the next few weeks..."

A gracious round of thank you's to his readers and tipsters ended with one last wisecrack.

"I guess what I really mean to say is — I prefer Italian, maybe a little sushi, and if you want any gossip about Nick Denton you'll have to pony up for some wine."

5 thoughts to “Where in the World is Nick Douglas?”