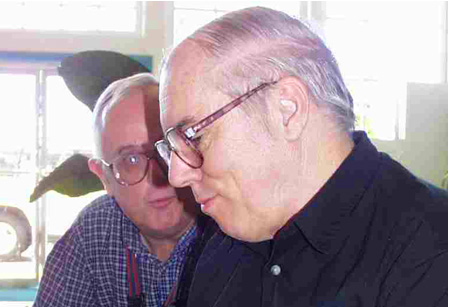 On Friday, Arizona police arrested a 64-year-old man — a fugitive since 2001 in a bizarre war that mixes free speech, copyright law, and the Church of Scientology.

Keith Henson's journey began seven years ago while innocuously watching another critic mock the group on an internet newsgroup. In a gonzo discussion about procuring a "Tom Cruise missile," they'd joked about working with "Secret Agent 99, wearing a stunning black leather biker outfit." Other posters joined in the internet discussion, asking whether Tom Cruise missiles are affected by wind."No way," Keith joked. "Modern weapons are accurate to a matter of a few tens of yards."

The police were informed of his "threatening" posts, and Henson was arrested.

The police tipsters were the Scientologists themselves, who had already been the targets of an annoying picketing campaign by Henson over the death of a woman near their complex. Besides Henson's inability to acquire long-range missiles, his wife notes bitterly that it would be impossible for any church members in the complex to feel threatened by the internet posts, since they aren't even allowed to access the internet. Scientology officials have also claimed Henson followed their employees home — though Henson counters that "the same people who claimed to have been 'terrorized' by the picketers offered to take them to lunch on June 25, 2000, evidently to distract them from the death scene being cleaned up."

Though Henson was found innocent of long-range missile terrorism, for his activities he was convicted of interfering with a church — a California hate crime for which he received a six-month misdemeanor prison sentence. But Henson said he feared his life would be in danger from Scientologists if he were imprisoned - and he fled to Canada in 2001.

He was already bankrupt from an earlier ruling that he'd infringed on Scientology copyrights. But Henson continued picketing Scientologists in Toronto, and they apparently retaliated by informing Canadian police of his presence. (Henson believes the Scientologists told police he was a terrorist and bomb maker.) L.A. Weekly reported two unmarked vans pulled up and "a handful of emergency-services task-force officers — Canada's version of a police SWAT team — spilled out, wearing body armor and carrying submachine guns." Describing the event, the EFF reported Henson was "arrested in a shopping mall parking lot, by a heavily armed paramilitary unit."

EFF Executive Director Shari Steele argued that Free speech was at stake in his case: "This trial seems intended to punish Mr. Henson for his opposition to a powerful organization using the barest thread of legal justification to do so."

His wife added in an interview with a Canadian newsweekly that "It's horrifying to me and to his friends how they've managed to twist his words."

Henson was ultimately released from a Canadian jail after filing an application for political asylum — reportedly the first ever accepted for review by the Canadian government, and for the next three years he lived as an expatriate in Canada, awaiting their decision.

When asked to describe life in Canada, he replied "colder." As the years rolled by, Henson explained his picketing strategy evolved out of a desire to have a real impact. In a 2005 interview he argued that heavy-handed legal tactics intimidated police from acting against the organization, and "Starving Scientology of new members is perhaps the best we can do."

But when Canadian officials reached a decision in 2005, Henson was suddenly filled with concern. The hearing could result in his deportation back to the prison where he feared for his life. He reportedly said, "I'm not going to be shoved across the border into the hands of Scientologists," Henson slipped out of Canada, returning to fugitive status, and joked that he was hiding in the Mortmain Mountains — the treachorous range in Lemony Snicket books.

For 17 months he lived on the lam. Yesterday, in the small town of Prescott, Arizona — the law finally caught up with him. Henson had been driving his wife's car, and when stopped by police, was soon informed of the outstanding warrant for his arrest. He was taken into custody, and faces extradition back to the California prison he's feared for the last six years. Saturday morning Henson's wife, identifying herself as a "soon to be widow," issued a plea asking the public for legal help, publicity — "anything but the usual Scientology private eyes who have harassed her for years."

Henson has a long history of activity within tech culture. He was one of the founders and leaders of the L5 Space Colony movement in the 1970s. (California's new Attorney General, Jerry Brown, was also in the L5 orbit when he was Governor of that state.) He was a close associate of K. Eric Drexler while Drexler was conceiving nanotechnology. He has also been active in the digital encryption movement, and has been associated with the Transhumanist movement — particularly Extropy Institute.

Former Extropy Institute members and other well wishers have already created a legal defense fund. There is also now a "Free Keith Henson" blog where people can keep track of new developments. Henson has many friends and late Friday night one supporter even called the jail, according to a Usenet post, and spoke to a prison staffer.

"I asked if he'd tell Keith that Tory sent her love. And I asked him to please watch after Keith."