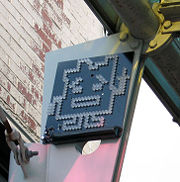 January 31, 2007: a day that will live in infamy. The great city of Boston was brought to its knees by the appearance of unexpected L.E.D. placards in places where they didn't belong. Alert to potential connections between terror and anything a wee bit unusual, stout citizens and government officials alike in the land of the free and the home of the brave peed their metaphoric pants. The L.E.D. character was described in a CNN report as "a Mooninite, an outer-space delinquentâ€¦ greeting passersby with an upraised middle finger." Massachusetts Attorney General Martha Coakley was quoted in the same piece as saying, "It had a very sinister appearance." The horror. The horror.

A pair of young Bostonians were arrested for perpetrating this dastardly act as hired guns in a guerrilla marketing campaign to promote the upcoming movie, Aqua Teen Hunger Force Colon Movie. The two lads, Peter Berdovsky and Sean Stevens were charged with "placing a hoax device in a way that results in panic," a felony, and disorderly conduct. At a news conference, Berdovsky and Stevens refused to talk about the case but expressed a willingness to opine at length on '70s hairstyles. They were not taken up on their generous offer by the gathered media.

Berdovsky, known popularly as Zebbler, has plenty of hair to think about â€“ long dreadlocks down to his waist. He also has a reputation in Boston — and increasingly around the world — as a popular VJ, video artist, performance artist and painter. Sentenced to 80 hours community service for his crime, he made the most of it, painting a delightfully trippy mural for Spaulding (physical) Rehabilitation Center. He was also recently voted the #12 VJ in the world by London-based DJ Magazine and was named Boston's Best Artist by Improper Bostonian Magazine. Zebbler also recently appeared in Berkeley, Caliifornia where his surround sound HD projection set was part of the opening reception for RIP.MIX.BURN.BAM.PFA at the Pacific Film Archives — an exhibit that "celebrates the cultural and artistic practice of remix."

Meanwhile, the film that brought down the city, Aqua Teen Hunger Force Colon Movie was, undeservedly, a commercial flop. (Maybe if they'd shut down more cities, people would have noticed.) But it is now out on DVD, so don't wait to discover what happens when Carl gets strapped into the insane-o-flex. Like the cartoon, the movie is, at times: ridiculous, stupid, hilarious, clever, and â€“ of course â€“ composed of cheesy bad animation. Rent it. You can't go wrong.

RU SIRIUS: Most people who read this will probably just know you as the guy with the long dreads who got caught up in the big Aqua Teen Terrorist scare of 2007. Were you in any way prepared to get caught up in anything that absurd?


ZEBBLER: Well it depends. I never expected anyone to freak out over the L.E.D. placards. However, I recognize people's perceptions of me. I behaved in a manner that was consistent with my knowledge of how I am perceived, although there were definitely a few unknowns. I have never seen a guy with long dreadlocks in a situation like mine. People's reactions were pleasantly positive. On the streets, in airports, stores, events — people who recognize me are generally very positive and curious.

RU: I've known a couple of people who have wound up in situations with Homeland Security basically around technologies that were not understood. They found themselves facing a veritable platoon of armed agents and various other types of hostility. How was your treatment at the hands of law enforcement, homeland security and so forth? Did anybody on that team say or do anything particularly bizarre or interesting?

Z: Yeah, there were lots of interesting statements from them. My interrogator gave me nothing but carrots to eat. I cooperated fully — since I had nothing to hide — but at times it was uncanny as to how convincing he was. He made me want to tell him my deepest secrets — a genuinely weird feeling. I had to snap out of it a few times. He promised to give me back all of the mooninites they have confiscated from me. It was a lie and I knew it as he was saying it.

The biggest surprise was from one of the older state police person. On the way out of the holding cell where we were held in overnight, there were whispers about us being famous as a result of what happened. One of the higher-ups came up to me as I was being led away in shackles and said: "My daughter is a huge fan of you. She watches the show and knows all about what happened. She was so excited that I get to see you." He paused for a second and added: "So... did you really mean to blow up Boston?" I think I just growled with disbelief after that statement and walked out to face the press staking out the holding cell in the bitterly cold morning.

RU: You're a pretty well known video artist and VJ. What do you try to do with the medium and tell us about a few high points in your career?

Z: I am moving more and more in the direction of solo surround sound custom HD video performances. I have spent several years creating custom psychedelic content in my resolution. To my mild surprise, it's starting to be recognized by the fine art community. I recently performed solo at Berkeley Museum of Art (California) as part of their RIP.MIX.BURN.BAM.PFA. There are also talks about performing for the Anchorage Film Festival (AK).

I tend to get physical in my performances. I am known for wearing costumes and masks during performances and potentially more than other VJs I have been mistaken for DJs during many shows.

Right after graduating from Mass College of Art, I went on a major US tour providing custom video projection performances for Ozric Tentacles. That was pretty great. A lot of work (25 shows in 30 days all over US) — but a great introduction to the industry and craft of live performance in big venues.

RU: You also worked recently with Alex Grey, the painter who is much known and admired in psychedelic circles. How have psychedelics influenced your work... and do you think your experiences helped you maintain your sense of humor throughout the whole Aqua Teen Terror crisis? You guys were pretty gracious and disarming when you went on Fox with Geraldo.

Z: Mmm... that's a big question. Psychedelics were a major part of my inspiration to create art. As a teen, I read a lot about human psychology and heard about the sensory deprivation experiments, where people are faced with nothing but their inner world. It inspired me to seek similar experiences. Probably, it was my desire to seek the unexplained, the otherworldly. It was a yearning to prove to myself that there's something outside the box. I have since learned to differentiate between genuine revelations and delusional mind tricks. I am not as intensely into mental experimentation these days — instead I'm trying to recreate a lot of the feelings, concepts and sensations through my art.

A life-changing psychedelic experience is an honest slap in the face with a realization of our own arbitrary position in the universe. Regular societal roles become unglued. Personal impulses reveal their egotism. It did not seem to offer a path to salvation, just a widening of perspective.

One doesn't need psychedelics to achieve those kinds of realizations however. While it helped my sense of humor to a degree — I think ultimately it's my personality that's responsible for my sensations and behavior during the Aqua Teen Boston Bomb Scare. When I am faced with an uncontrollable situation, I let go of trying to control what's beyond reach, and focus on what I can change. Both Sean and I didn't want this case to intimidate or frighten people. We were sick of media spinning stories to make them scarier. So we came up with a way to disarm the media — first with our press conference.

RU: Tell us about your video show, "I Wash My TV in Fear"

Z: It was my reaction to seeing so many fear-inducing messages constantly on our TV screens. Since the news became a business, they realized that fear creates the need to watch. The TVs at my performance were literally awash in fear. I recorded a day or two of television news and selected the most frightening messages to create a hyper saturated barrage of FEAR that I then perform live on multiple screens with custom music/edits/animations.

RU: So what did you think of the Aqua Teen movie? I thought it was pretty hilarious nonsense but you may disagree. And do you think it's weird that all the publicity didn't create any curiosity for the flick?

Z: I thought it held up strong with a hilarious start and beginning/middle. But, ultimately I was hoping for a more intelligent ending. Instead, it all just went to hell. But so be it — I had a good time. And it was a little strange that it didn't get that much attention. I attribute some of it to the execs freaking out and backing off from the promotional opportunity that this event gave them.

See also:
Is It Fascism Yet?
Burning the Man with Hunter S. Thompson
The Great Wired Drug Non-Controversy
10 Worst Spiderman Tie-Ins
Art or Bioterrorism: Who Cares?
Lost "Horrors" Ending Found on YouTube
Homeland Security Follies
Prior Permission Required by Government Before Each Flight

14 thoughts to “Catching Up With an Aqua Teen Terrorist”