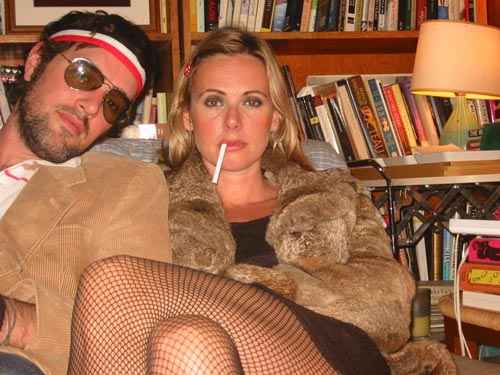 But on New Year's Eve, five months after her death, she updated her blog.

January's Vanity Fair had already trumpeted "The New York Art World's Bizarre Double Suicide" in a cover story this month. (One week after Theresa's suicide, Jeremy Blake, her partner of 12 years, removed his clothes and walked into the ocean at New York's Rockaway Beach.) Morbid interest in her blog was only exacerbated when, three months after her death, a new post suddenly appeared on her blog just two days before Halloween. Its title?

It's a weird final twist for the A-list blogger and game designer. In the last year of her life, Theresa's apartment was in a New York rectory "allegedly haunted by the ghosts of Edgar Allan Poe and Harry Houdini," according to Vanity Fair, and she'd developed an apparent intrigue in at least one ghost story.

Unfortunately, the entire 423-word post was written by Dick Cavett. On his own blog at the New York Times site, the former 70s talk show host had promised his readers ghost stories. In February he'd told a story about the actor who'd played Sherlock Holmes in the 1940s. (Moments after Rathbone's friend is killed in a car accident along with his beloved hunting dogs, the actor receives a phone call from a psychic who says she's received a ghostly message. "Traveling very fast. No time to say good-bye. There are no dogs here.")

Theresa wrote a post scheduled to appear at the end of October, quoting the entirety of Cavett's last six paragraphs.

The next time I saw Rathbone...more years had gone by, and he was in the act of receiving a summons for letting his dog Ginger off the leash in Central Park. I thought he might have decided, looking back, that it had all been some sort of bizarre coincidence, or maybe a highly original prank. He said, "At the time, of course, I was quite shaken by it." And now? "I am still shaken by it."


A note below the post warned that a second one would appear on New Year's Eve — the final blog post of Theresa Duncan.

And increasing the tension was another dark story lingering after her death — the couple's belief that Scientologists were secretly harassing her. Vanity Fair reports that her boyfriend Blake "wrote a 27-page document encapsulating their claims, which he planned on using as the basis for a lawsuit against the Church of Scientology." (They also report Tom Cruise's denial that he interfered with her negotiations to direct a modern version of Alice in Wonderland, which her agent says was blocked for "budget considerations.")

Theresa's fear of Scientologists had already led to bizarre confrontations with their Hollywood neighbors, according to the article.

"Theresa said to me, 'Jeremy and I have started a club where we've found a bunch of old men and we're letting them fuck us in the ass, and we wanted to know if you wanted to be a part of it.' I asked Theresa if she was joking. She said 'no' and repeated herself..."

In July, when O'Brien came home and picked up her mail, she wrote, Duncan "shrieked 'cult whore' and 'cult hooker' repeatedly. She was very frightening."


Both incidents appeared in a letter supporting the couple's eventual eviction from their bungalow in Venice, California in August of 2006.

But a strange mystery lingers over one detail of Theresa's story — the fact that rock star (and Scientologist) Beck pulled out of Theresa's Alice movie. New York Magazine found a curious inconsistency in Beck's statement to Vanity Fair that he'd "never met to discuss doing her film." Blogger Emmanuelle Richard says she found an Italian interview where in fact, Beck gushes excitedly about preparing for his upcoming movie debut. ("It will be full of energy and full of characters: some kind of Alice in Wonderland set in the 70s... The director is a friend of mine and it will be her directorial debut. We will begin shooting in the Fall.")

Or was their fast lane life simply catching up to them? Vanity Fair reports Blake sometimes took a hip flask of whiskey to his job at Rockstar Games, while Theresa "drank champagne by the bottle."

"It was starting to show in their faces; they were looking haggard."

After the couple's twin suicides, the New York Times ran an article about prowling through Jeremy Blake's computer, assembling his final artwork from the PhotoShop folders he'd left behind.

Other bloggers searched for a logic in the death of the two New York artists. "The same anxieties that underwrite Ms. Duncan's nightmare visions are to be found in the economic and technological circuitry that surrounds all of us," reads one post on the blog Jugadoo, "an erosion of stable modes of identity and selfhood..."


It isn't hard to imagine a future scenario when people will be able to generate AI-controlled virtual selves who will stroll around digital worlds like Second Life, having conversations with grief-stricken friends and family after their living counterparts are dead. That a person on the brink of suicide might leave a new kind of note.

It spoke of "twenty largely wasted years," saying trying to write is a failure "because one has only learnt to get the better of words for the thing one no longer has to say, or the way in which one is no longer disposed to say it."

Theresa is quoting T.S. Eliot, but she'd skipped the first four passages of "East Coker" to focus in on the fifth. "With shabby equipment always deteriorating in the general mess of imprecision of feeling, undisciplined squads of emotion..."

Her final mysterious post was another long quote, arguing wearily that the great truths have already been recorded and "There is only the fight to recover what has been lost and found and lost again and again: and now, under conditions that seem unpropitious."

"But perhaps neither gain nor loss. For us, there is only the trying.

The rest is not our business."

See Also:
Scientology Fugitive Arrested
Give Me Immortality or Give Me Death
Robert Anton Wilson 1932 - 2007
Death? No Thank You
Miracles