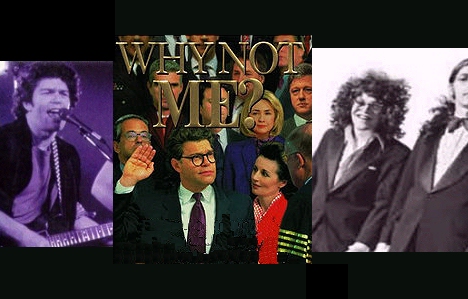 Through 35 years in show business, he left a wake of bizarre sketches. ("Don't worry about your breath and your armpits, Al. It's your personality that stinks...")

Web sites remembered Al Franken's strange past life as a movie and TV comedian when he joined the U.S. Senate last week — in the ultimate weird (or all-American?) triumph. At the age of 25, Franken had started his career playing himself in this parody of a spray-on deodorant commercial in the 1976 movie Tunnel Vision.

"Hi. I'm one of the best-looking guys in town," he explains to a woman in a swimming pool. "Wanna go somewhere and shoot the shit?"

"Where do I meet you with my gun, feeb?" she replies.

Future-Senator Franken even lights up a joint in one rowdy 1986 movie — and sings "I'm gonna get laid! I'm gonna get laid." ("Hey, I can't help it," he explains. "I'm a lesbian trapped inside a man's body.")

In One More Saturday Night, Franken played the singer in a scruffy local band — the Grateful Dead's Jerry Garcia produced some of the movie's music — and the movie ends with Franken's character taking Percodan and Demerol for a punch in the jaw. ("Idiot could've gotten 20 of those if he'd asked for them," says a bandmember played by Tom Davis — another Saturday Night Live writer who co-authored the movie's script with Franken.)

Their film resembles Fast Times at Ridgemont High, cross-cutting between several interlocking teen-oriented stories. ("Dad, did you ever have sex with any ladies besides Mom?") The widower dad gets busted having sex by the lake, but what's most fascinating is the script's perspective on the state of Minnesota — which would later elect Franken their Senator!

"The state of Minnesota has got more blonde, luscious, genetically pure Swedish women than any place in the world," Davis tells Franken. Al tries to wave Tom off of one hot prospect, saying "She's got kids," but their script supplies Tom with a weird comeback.

But the most scandalous thing about the movie may appear in its closing credits, which thank James R. Thompson, the governor of...Illinois. Franken's movie about a night in a small town in Minnesota was filmed entirely in Illinois, after Minnesota's Film Board deemed its script too obscene, according to Davis's recently-released biography.

He also reveals that this movie was never released on DVD — or even into theatres, after it failed two test screenings in Times Square and Sacramento, California.

In March Davis released his tell-all memoir about performing with Al Franken as a comedy team — including a drug stop at the Canadian border. Davis hurtled an incriminating hash pipe into a river — in front of the border police — who then insisted on detaining and strip searching both Davis and Franken, along with their friends. (One friend suggested next time, he'd hide a folded note for the officer between his butt checks.) But when the police tried to intimidate the future Senator, telling him privately that his partner had already confessed to everything, Franken daringly improvised the perfect response.

"We didn't mean to kill that Indian! It was an accident!"

There's also a 1983 visit to Jamaica, in which Franken spends an hour teaching a native how to play Frisbee, "before he finally figured out she was a hooker." But Davis's book also reveals the two most disturbing facts about the man from Minnesota. Franken's wife, Franni, was once Pauly Shore's baby sitter.

And Franken's mouth is so large, he can cram his entire fist into it.

Franken loves to tell the story about challenging future-President Ronald Reagan with a question about decriminalizing marijuana. (In 2004 Bill Clinton, at a book signing, greeted Franken by saying "My hero's here.") Franken recaps the incident in his book Rush Limbaugh is a Big Fat Idiot. But in 1999, for his second book, Franken described making a (fictitious) run for a seat in Washington — the Presidency — just 10 years before his actual swearing in as a Senator.

"As you know, I have not been elected president," Franken explains patiently to the Supreme Court's Chief Justice, William Rehnquist, in a fake letter which opens Why Not Me, adding "and I have no plans to run for office — local, regional, or national." (Franken then asks Rehnquist if he'd appear on the book's cover...and if he'd travel to New York for the photo shoot — by train, during off-peak hours, to reduce Franken's expenses.)


And the book also includes a campaign speech where Franken promises no major scandals during his administration. But "I'm not saying there will be no scandals whatsoever. No candidate can honestly make that pledge."

Unfortunately, his fictitious administration unravels after the release of an all-too-honest campaign diary. ("May 6... Splurged on hooker.")

The book's election might've gone differently if voters had paid more attention to Franken's campaign biography, The Courage to Dare, which chronicled his experience with entrepreneurial success in college: founding the Fabulous Freaky Freakout Company, along with its subsidiary, the Smoking Doobie Banana Brothers, Ltd.


I Fought the Law

It was the strangest omen of all, when the media and political worlds began merging right before America's eyes.

Just eight years later, Franken announced his own candidacy for the U.S. Senate — and he's now working with John Kerry.

The studio's atmosphere was surreal. "Next door was Sesame Street," one of the directors remembers on his blog, "and it was not uncommon to see guys walking down the hall with Muppets on one hand and cigarettes in the other." But the puppets would also share the hall with other misplaced guests from Washington, including Congressmen Dick Gephardt and Pat Schroeder.

There were visits from former presidential candidate Michael Dukakis, plus one-time Clinton administration officials like Joycelyn Elders and Robert Reich. The Muppets might also spot real-life political pundits like John McLaughlin, Pat Buchanan, and William F. Buckley dropping by. And the show even had parts for Allison Janney and Martin Sheen — the future stars of The West Wing.

Franken's show would mock journalists — he played a late-night TV correspondent — but ironically, in this episode, the future lawmaker would get pulled over by a cop.

And his night's about to get a lot worse....

"I take this oath very seriously," Franken said last week from the Senate Judiciary Committee, as he prepared to question Sonia Sotomayor over her nomination to the Supreme Court. "I may not be a lawyer, but neither are the overwhelming majority of Americans. Yet all of us, regardless of our backgrounds and professions, have a huge stake in who sits on the Supreme Court."

But while he'd later ask many questions — about privacy, internet access, and the right to an abortion — Franken's long strange trip came full circle when he'd eventually grill the future Justice over a TV-related question.

What was the one case that Perry Mason lost?

"Like you, I watched it all of the time," Sonia Sotomayor admitted, though she was unable to cite the fictitious case's title.

"Our whole family watched it," Franken remembers warmly, in one last nod to his television past. "And because there was no internet at the time, you and I were watching it at the same time."

"Is the Senator from Minnesota...going to tell us which episode that was?" demands Vermont Senator Patrick Leahy, giving Franken a chance to make one last oddball joke before launching his six-year term.

One thought to “The Past Lives of Al Franken”