We parked and walked to the Qwest Arena on the Grove, where the line snaked out and wound and looped around as shown in the above image. Typically, the line was 5 people thick, and I swear it felt like a mile walk from the beginning to the end. Ironically, the end of the line where we were at 6:30 was about a block from my wife's parking garage, where we started.

There were more than 8,200 Democrats there (and according to the Idaho Statesman 1,600 people caucused in neighboring Canyon County, and more than 20,000 people showed up around the state — about four times more than in the last record year, 2004).

It was cold, and I felt like I was standing in a bread line in the Soviet Union. I felt sorry for the girl in flip flops and a miniskirt in front of me. But there was a lot of camaraderie!

There was no way we were getting in by 7:00, and Obama volunteers walked the line telling us that everyone was going to get to vote. Eventually other volunteers showed up with ballots, and we voted in the freezing cold. I filled in my ballot on a bus bench shaking my ball point pen to get it to work.

We left and got a cup of coffee. Everyone was talking about the caucus. 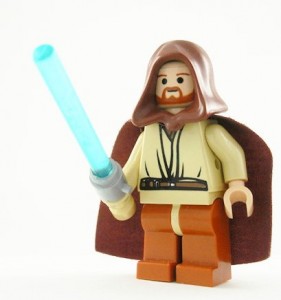 Legos have changed. The CEO Of the Lego Group claims they're now "very open source," re-oriented to lovers of the Lego brand. Of course, he's "adjusted" the business costs, but mostly they've made a return to their traditional emphasis on "the joy of building and the pride of creating things."

I'm not convinced. As an educator who's been using Legos to teach kids for over a decade (advance high school stuff, like how to build catapults and the physics it demonstrates), and despite the CEO's new interview, I feel an urgent need to express where Lego has gone wrong.

I can remember when the owner of Lego promised they would never promote or create war toys. For me this was a big selling point: a toy that wasn't destructive, and in fact didn't promote destructive behavior in their advertising! Sure, kids might build a tank or a mock gun, but it was a product of their own imagination, not the building plans! Our motto in the after school centers was: "Peaceful, Positive and Practical."

Over the last decade, I've seen Lego's themes take them gradually to war. It started with minor "minifig" characters and then fully developed violence-based pirates/soldiers/knight themes. Then there was a shift to Galidor's "Defenders of the Outer Dimension" tie-ins, and Bionicle fighting the evil Makuta. Now there's full-fledged futuristic mecha-war machines in Exo-Force!

When Lego first started down this road — with knights — the owner of Lego explained they were highlighting the "romance of the knights," and not emphasizing violence. With the wave of new themes, this isn't really true anymore.

Years ago, there was a brouhaha about an artist who created a Lego kit based on holocaust scenes. Lego would never produce such kits. However, I do predict that Lego will continue to produce war-based themes, and it's only a matter of time before they produce "tank" models or other modern war machines.

Lego always seemed to be something greater than a retail product. I attended a conference at MIT where I heard it argued that Lego should be considered a new category of Froebel's Gift. (The "free play" educational toys designed for kindergartens in 1840.) The boxes were always fairly generic, and emphasized interesting constructions for different age groups. But over the last decade we've seen countless movie tie-ins and multiple product spin-offs.

Lego has unleashed waves of comic books, candy, movies, video games, and waffles. Children will refer to a kit as "Batman Legos." It used to be that I could walk into a toy store and immediately identify the Lego section. Today, they're interchangeable with other popular construction toys.

A related trend is the rapid phase-in and phase-out of kits. Lego's goal seems to be to whet the appetites of collectors by producing hosts of special kits, and then promptly discontinuing them. This is frustrating when a particularly well-done or interesting kit suddenly becomes unavailable.

Part of the beauty of Lego was that you could keep adding to your collection of generic interchangeable elements, to build larger and more complex projects. We've seen a trend towards specialized decorative elements, likely as a result of movie and TV tie-ins. We've seen Lego move to smaller elements — perhaps in an effort to save money by using less plastic. In any case, any retail Lego collection fills rapidly with gobs of sorta-useable decorative elements. It's a far cry from the construction kits of the past.

4. They moved their manufacturing

I admit I am biased, and I understand that because of globalized production, the world is flat. Yet, there was a romance with Lego. They were made in Denmark. (Though some bricks were produced in the United States.) Now they have moved manufacturing to Eastern Europe and China. This undoubtedly saves them money, but it destroys some of the romance. What's the difference between a knock-off brick made in China and a Lego brick made in China? Lego even let many of their U.S. developers go! There was the "farmhouse" — in Connecticut I think — where Lego geniuses planned new kits and themes. They were all let go. It makes me wonder if the pseudo-move to open source is really a way to keep overhead down by not having any developers on hand.

Lego still has a variety of wonderful kits and themes. The RCX/NXT trends are awesome! That said, they are a shadow of the fantastic constructive elements I worked with a decade ago.

I think that says something about Lego.

See Also:
Rodney Brooks' Robots are Fast, Cheap, and Out of Control
Google Stalker Reveals Secret Project
Catching Up With An Aqua Teen Terrorist
What If Ben Were One of Us?
Is The Net Good For Writers?