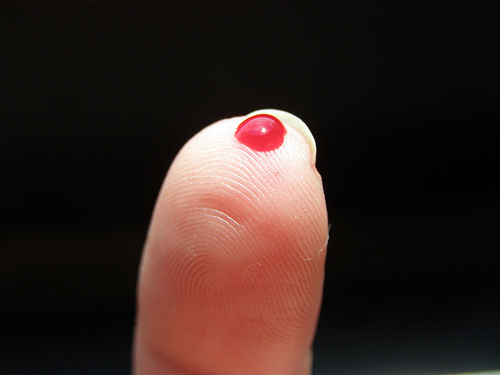 When Lisa Bloch opened the drawer at San Francisco General Hospital that should have housed the trauma center’s blood supply last month, a lonely single pouch of type O-negative plasma tumbled in the empty space.

Bloch, director of communications at Blood Centers of the Pacific, was seeking to draw attention to the city’s dire shortage of blood by depicting it in graphic terms. The shortage got so bad early in the month that BCoP asked local hospitals to hold off on lesser-priority surgeries.

All across the country, large cities are struggling to keep supplies at sufficient levels. The reasons are a classically tragic conflict of supply (only about five percent of adults donate blood) and demand (day-to-day trauma center crises, national emergencies, the Iraq war).

Unfortunately, agencies that collect blood are fighting the battle to keep local and national blood supplies adequate with at least one hand tied behind their backs, because a sizable percentage of the population is barred from donating blood – gay men.

If you’re a man who has had sex with another man even once since 1977, you are not allowed to donate blood. The ban was instituted during the height of the '80s AIDS outbreak, before proper testing existed that could screen out infected blood.

But despite the leaps and bounds that have been accomplished in testing blood for HIV/AIDS, the Bush administration still doesn’t think the blood of gay males is good enough.

In San Francisco, given its higher-than-average gay male population, this keeps many who would like to donate from being able to help out in what has become a day-to-day crisis situation, let alone in the event of a local or national emergency.

But San Francisco proper has just more than 1 million people. Larger cities with a large gay male presence like Los Angeles and New York City (both of which have suffered from blood shortages recently) are also affected by the inability to tap into its gay males as a blood resource.

“We have gay men come in and are surprised the ban is still in effect,” said Bloch. “They’re ready to give blood, and it’s very frustrating that we can’t use it.”

BCoP was the very first organization imploring the government to soften its stance. In 2006, the Red Cross finally joined in the effort to get the Food and Drug Administration to implement the male-to-male (MSM) deferral.

“Today, we know much more about HIV,” the center wrote to the FDA. “The development of highly sensitive genetic tests for the virus has greatly reduced the “window” of transmission. Therefore, Blood Centers of the Pacific – along with the three national blood banking organizations: America’s Blood Centers, American Association of Blood Banks and the American Red Cross – believes that a 12-month deferral would adequately prevent transfusion-transmission of HIV.”

A 12-month deferral is consistent with other high-risk activities that may exclude someone from donating blood, including sexual contact with a prostitute, getting a tattoo (for hepatitis C) and traveling to a region endemic for malaria.

But the FDA not only refused, it didn’t even dignify the request with a response.

State Assemblyman Mark Leno, an openly gay male, is convinced the Bush administration is letting its obvious agenda against gays influence public policy on an issue that not only involves public health, but national security.

“There is indeed homophobia at work, and it’s not even very subtle,” said Leno. “None of this (the FDA’s inflexibility) is scientific.”

Like many, Leno was unaware of the policy until he tried to donate blood when he was on the San Francisco Board of Supervisors.

“When I was on the board I got an invitation to participate in a blood drive, and was surprised to learn that as a gay man I wasn’t allowed to participate,” he said.

Leno likened the FDA policy to that of the Catholic church, which officially is “okay” with homosexuals, as long as they don’t actually do anything gay.

Ironically, heterosexuals who engage in high-risk sexual behavior are allowed to donate blood. Some feel the whole process needs to be revised to screen out high risk groups accordingly.

“They’re asking the wrong questions,” said Leno. “Ask what behaviors individuals are engaging in, not with whom.”

The issue is expected to go before the FDA again next month, though there doesn’t appear to be much hope that the current administration will implement the MSM deferral that blood centers are counting on.

Leno chuckled bitterly at the prospects, choosing instead to look forward. “With a Democratic administration, which I believe we’ll have next year, I’ll be working with House Speaker (Nancy) Pelosi to not only reverse this dangerous policy, but to address the shortage and the screening process.”

“I don’t know how much longer they can keep stalling,” said Bloch, who agreed that a change of administration might be necessary before the FDA takes any action.

With gay men in San Francisco making up somewhere between five and 10 percent of the city’s population, a change in policy could produce noticeable results.

“I think it could make an impact on local blood shortages,” said Bloch. “Any help is a good thing, especially in times like this.”

8 thoughts to “There Won’t Be Blood”