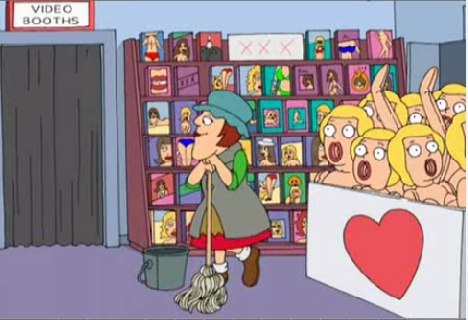 In the Family Guy episode "Peterotica," Peter and his friends go to the local adult bookstore. What happens next was apparently determined by the following sequence of events.

1. Family Guy asks Carol Burnett if they can use the theme to her 1970s variety show.

3. They draw her into the cartoon as the adult bookstore's cleaning woman.

And then comes #4 — Carol Burnett sues them.

Related Links
» Buy the DVD
» Watch the Episode Online
» Screech's Sex Tape
» Craigslist Sex Troll Gets Sued
The Fox Network has expressed surprise, since she appears in the cartoon for only four seconds, but Burnett's lawsuit reportedly claimed violations of copyright and trademark law, plus a misappropriation of her name and likeness. This weekend a judge revealed what happens in step 5: Carol Burnett loses that lawsuit. According to news reports, a judge signed a ruling Friday that while the the Family Guy episode may offend her — the First Amendment allows parodies. (After all, her original variety show was famous for its own parodies.)

Carol Burnett is a pioneer in celebrity lawsuits. In 1981 she surprised legal observers with a successful lawsuit against the National Enquirer over a report that implied she'd been drunk in a restaurant with Henry Kissinger. (â€œIn a Washington restaurant, a boisterous Carol Burnett had a loud argument... But Carol really raised eyebrows when she accidentally knocked a glass of wine over one diner and started giggling instead of apologizing...") She may have been vindicated over that slight to her public image, but as a public figure she's also fair game for ridicule. And thanks to Family Guy, an animated likeness of the 74-year-old comedienne can be glimpsed in some very unsavory company.

Peter's career ends after the disgruntled motorist's lawsuit — and he also gets a surprise visit from... Betty White.