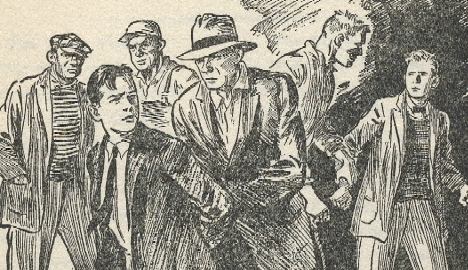 "In his diaries, my father talks about having to write another of those cursed books," the author's son told one interviewer, "in order to earn another $100 to buy coal for the furnace." ("It was very good money during the Depression," Leslie McFarlane recalled in a radio interview forty years later. Both interviews are linked from the author's entry on Wikipedia.)

But over 100 million books have since been published with the boy detectives he brought to life. "A royalty of even a quarter of one percent would've been all right," he added wistfully... 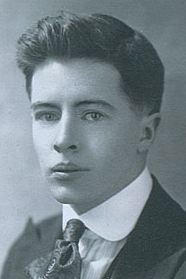 Ghost Writer Leslie McFarlane
In 1926, a 24-year-old McFarlane accepted a short-term contract position which led to his writing the first sixteen Hardy Boys titles under the pseudonym Franklin W. Dixon. "I never did learn what the 'W' represented," he groused in a commemorative introduction later. "Certainly not Wealthy."

It's the mystery of the disgruntled ghost writer, as I discovered when reading the original 1929 version of The Secret of the Caves and found myself wondering: Are there dirty jokes hidden between the lines? He'd "inject his wonderful sense of humor," McFarlane's daughter once remembered, to make the writing project "palatable."

"And then he'd finish and say, 'I will never write another juvenile book.' But then the bills would pile up and he'd start another..."

It's been 80 years since the Hardy Boys mysteries first appeared, and the change in our language is hard to miss when the two brothers first begin investigating a ring of car-stealing smugglers, and their best friend describes his stolen vehicle.

"The car is pretty well known around Bayport," said Chet. "It was certainly a gay-looking speed-wagon."


Wikipedia argues the word gay "implied a willingness to disregard conventional or respectable sexual mores...as early as the 1920s."

In his 1928 book The Shore Road Mystery, McFarlane had accidentally chosen words whose meanings were changing, I thought. But the same accident recurred just a few pages later, when the boy's aunt Gertrude argued they shouldn't post bail for farmer Dodd's son. "You can't rely on men who don't have a woman around the house to keep them straight."

Interestingly, McFarlane's publishing syndicate had given him strict instructions on how to portray the boys' romantic lives, he revealed in the commemorative introduction. "It was intimated that relations between the Hardy Boys and their girl friends would not go beyond the borders of wholesome friendship and discreet mutual esteem."

Was the book's author wryly hiding double entendres as a backhanded slap at his employer and their straitjacketing guidelines?

Or do readers in the 21st century just have dirty minds...


I've agonized over this question, but if it's true, then McFarlane's magnum opus was a 1929 masterpiece of dirty double meanings called — what else — The Secret of the Caves. Within a few chapters, an elderly male shopkeeper is warning the Hardy Boys and their two male friends to stay away from the mysterious beach because "There's some queer things been goin' on down there lately." And what exactly does that mean, asks the Hardy Boys' friend — Biff.

"Nobody knows. But there's been queer lights seen down around them caves. And shootin'. Guns goin' off. Mighty queer doin's, they say..."

Chet whistled softly. "This sounds good! We may stay longer than we had intended..."


Wikipedia says the word "queer" already had sexual overtones by the late 1800s. 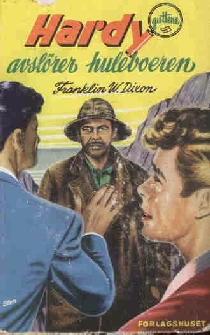 McFarlane's book even detours to report that the females in the book were feeling left out.

"I wish I were a boy," sighed Callie Shaw.

Iola Morton looked up from her ice-cream soda. "Me, too."


"It's tough luck that you're not," agrees Joe Hardy in chapter six, but unfortunately, exploring strange caves is a men-only job. McFarlane opens chapter eight by telling us that "The Hardy boys and their chums spent the night at a hotel in a small village..."

The four teenagers are on summer vacation, so there's time for some sleuthing. When they buy camping supplies, the old shopkeeper re-iterated again that it's a dangerous cave full of queer doin's, and Frank "smiled at this thrust."

But his younger brother Joe was even more enthusiastic.

"The one thing we're afraid of is a quiet outing. Excitement," he added slangily, "is our meat."

"Ye'll get lots of it if ye go pokin' around them caves," the old gentleman predicted.


Maybe that was the book's rejected first title — Excitement is Our Meat.

In any case, by chapter 15, the four friends have started exploring the caves. There's a lot of darkness and candles, but apparently the four lads aren't alone. Within a few pages, the chums are approached by a strange looking old man.

"What a queer duck he is!" exclaimed Biff.


So that's the secret of the caves...


I wouldn't have said anything, except for an earlier scene where Frank Hardy regains consciousness in one of the cave's pits — and the narrator uses a tell-tale adverb.

[W]ith the aid of the rope, and with Joe and his chums pulling lustily, Frank was soon hauled to the top...


It's a strange book. The Hardy Boys' cave does prove to be filled with pits, but for the most part McFarlane's story records the mystery of the missing mystery. Until chapter 17, which veers suddenly into startlingly unwholesome territory. 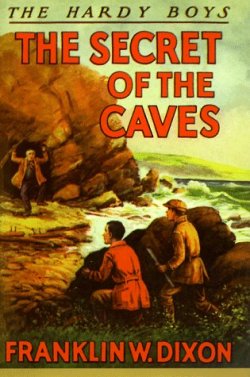 They were just approaching the cliff that hid the cave from view when Frank halted and peered through the fog at the base of the rocks some distance ahead.

"Do you see somebody lying there, Joe...? Seems like a man sprawled on the sand...."

The boys hastened across the rocks in the direction of the figure on the shore...

They came up to the man sprawled on the sand. He was not dead. An empty bottle lying by his side told the reason for his slumber.


So "The Secret of the Caves" is — they have a liquor license?

He was quite senseless from the effects of the liquor he had drunk... "This is luck!" exclaimed Frank.

"What shall we do with him? asked Joe.

Frank groped in his pocket and produced a length of stout cord.


Say, what kind of beach is this, anyways?

The Hardy Boys had apparently identified their sexy smuggler as an escaped criminal who's wanted by the police — and their stars are lining up.


They throw hat-fuls of water into in his face to revive him — but when he wakes up, they keep throwing more water at him.

"Hey! What's this?" roared the car thief indignantly. He had just discovered that his wrists were bound.

Water was streaming down the man's face. He was thoroughly aroused by now.

The Hardy Boys prevailed, and eventually turned their captured smuggler over to the police. I don't know if they then lit a cigarette — but I decided I didn't need to read any further. I'd already guessed the secret of the caves.

But one tantalizing mystery about the Hardy Boys remained. How could such a wildly popular detective series be created by a man who was so ambivalent about them? And could he really write a total of 21 Hardy Boys books without leaving behind a hint of his true feelings?

As the years ticked on, Leslie McFarlane dreamed of writing a great epic novel about the Canadian north. But instead, he lived just long enough to see the Hardy Boys turned into a cheery Saturday morning cartoon with their own faux-60s rock band.

McFarlane's creations continued marching through the decades, with the books' texts suffering major revisions to keep up with a changing world. Ben Stiller and Tom Cruise are even reported to be collaborating on a new movie based on the characters called The Hardy Men.

Shortly before his death, a radio interviewer surprised Leslie McFarlane, then in his 70s, with a quiz about his original ending for The Shore Road Mystery. In the book, the Hardy Boys had investigated the baffling disapperances of cars along the old shore road. So who committed the crime?

"I haven't the foggiest idea," the author answered. "And I don't really care."

But last year in an interview with the newspaper of McMaster University, McFarlane's daughter shared a haunting memory. At the end of his life, he'd delivered one last sad and final irony.

"You know, I think people are only going to remember me for those damn books."

27 thoughts to “How Gay Were the Hardy Boys?”