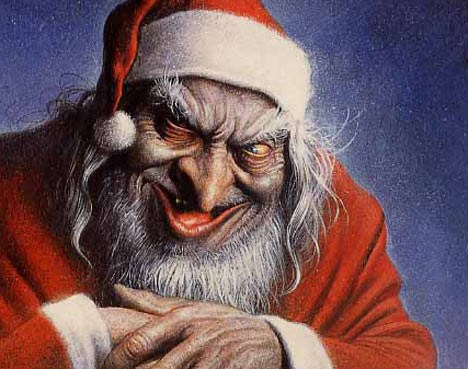 Jung might state the case thusly: Gods, as archetypes of the genetic human under-soul (or "collective unconscious"), cannot be killed or banished; they always return with a new mask but the same symbolic meaning. Related example: Young ladies in ancient Greece were often seduced or raped by satyrs; in the Arab lands, we note a similar outbreak of randy djinn; it India, it was devas. In the Christian Dark Ages, it began happening to young men, too, especially to monks. They called the lascivious critter an incubus. Now it's happening all around us, and the molesters come from Outer Space. The sex-demon, like the Great Mother and the Shadow and our ursine hero, and the three brothers hunting the dragon (recognize them in Jaws? Spot them doing their Three Stooges gig?) — these archetypal forces always come back under new names. Sir Walter Scott called them "the crew that never rests."

And the bear-god seems wakeful elsewhere. He has appeared prominently in other bits of pop culture — the movies Legends of the Fall and The Edge (both of which, curiously, star Anthony Hopkins, who also starred as Hannibal Lecter) and snuck into Modern Lit 101 not only via Joyce but also via Faulkner's great parable "The Bear." He also pops up to deliver the punch line in Norman Mailer's Why Are We in Vietnam?

We will see more of him, methinks.

Meanwhile, Santa, the Jester/Clown/Fertility God aspect of Father Bear, is doing quite well also, despite getting the bum's rush by some grim, uptight Christers. He has quite successfully stolen Xmas from X and brings pagan lust and pagan cheer to most of us, every year, just when we need it most — in the dead of winter. His beaming face appears everywhere and if we have a minor cultural war going on between those who wish to invoke him via alcohol and those who prefer their invocations per cannabis, we all share the pagan belief, at least for part of a week, that the best way to mark the solstice and the year's dying ashes is to form a loving circle and all get bombed together.

As a pagan myself, I wouldn't have it any other way.

16 thoughts to “Santa’s Crimes Against Humanity”