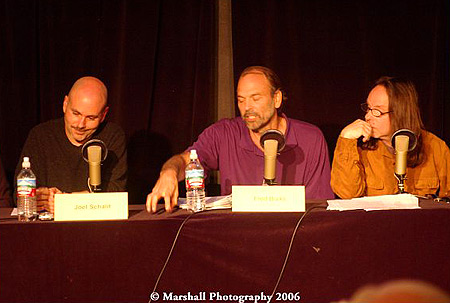 Those who believe that 9/11 was not an inside job are sheeple -- brainwashed dupes who have a psychological block against accepting unpleasant facts.

As a 9/11 conspiracy agnostic, I suppose I can live with both of those characterizations. (Oh wait, I forgot -- agnostics are gutless weasels who are afraid to take a stand.)

Both sides in this hostile exchange follow their own stream of evidence. Both sides say the evidence presented by their opponents is incomplete, misconstrued, or just downright false. Primary representatives of each point of view are characterized as sleazy opportunists with suspect connections. In other words, it's pretty much like all other political debates that happen during polarized times, but a bit weirder.

The weirdness mostly comes from the pro-conspiracy side.

Early theorists focused largely on the connections that always seem to exist between powerful armed gangs with a will to power -- whether they're state-based militarists and intelligence operatives or stateless terrorists. Shadowy possible connections between the CIA and Al Qaeda via Pakistan's Secret Service, the Saudi connections (including the business connections between the Bush's and bin Landen's): all sorts of tantalizing factoids and rumors could be spotted along the guns-and-money trail.

But over the last few years, "inside job" theory has focused mostly on presumed "smoking gun" physical evidence. This has resulted in a hyper-byzantine narrative that might look something like this: Government agents replaced passenger planes with remote-controlled flying something-or-others and also planted explosives in three WTC buildings. They somehow made the explosives go off at a particular time (or maybe the exact time didn't matter), but they made certain to fell not just the two buildings hit by the remote-controlled planes but one extra building, WTC #7. Bringing down this billion dollar building was an irresistibly convenient way of getting rid of some possibly damaging records.

Meanwhile, on the same day, a little while later, the Pentagon fired a missile at itself, making sure to hit the least valued section of their five-sided building, not the one where Donald Rumsfeld was hanging out. They were prepared to claim that the missile was actually a hijacked passenger plane. The people who were supposed to have been flying on these hijacked planes were maybe all packed onto the one plane that was shot down in Pennsylvania (contrary to the report that it was brought down by a struggle between the hijackers and the hijacked) even though everybody wouldn't have fit on the planeâ€¦ or who the hell knows what happened to them. The many calls from the hijacked planes, particularly the one that went down in Pennsylvania, were faked with technology.

Meanwhile, NORAD was given a "stand down" order not to scramble jets to defend against these planes, or else some conspirators made sure that they didn't scramble the jets fast enough. And all who might have been involved in, or would have known about such a thing, were reliable conspiracy members or were intimidated or bribed into keeping it all secret. Hundreds of people at various levels of the government, the sorts of people who are generally inclined towards patriotism, conspired to destroy or damage the symbols of American financial and military power. Oh, and all those who investigated the debris in the Pentagon and those who witnessed the airplane overhead were either easily tricked or sworn to secrecy. And that's just the short version.

The long version of this narrative would include not just the intentional subversion of operations against Al Qaeda; but the conscious, knowing subversion of investigations into what happened on 9/11 not just by the Bush administration but from all levels of Congress, various police-type agencies, and all who testified before investigative committees. It would also take in the false testimonies of structural engineers and other experts in physical evidence, indeed entire academic conferences were conducted simply to deceive (hmm, come to think of it, that description might apply to a few "Critical Theory" conferences I've attended). This conspiracy involved thousands of Americans from all walks of life.

And then there are a few theorists who think that no planes hit the WTC at all and that it was all done with holography. Most members of the "Truth movement" agree that those people are wingnuts!

As someone who is willing to entertain the idea that I live inside of some sort of Platonic matrix created by a cruel master-species whose general intentions occasionally leaked into the brain of Philip K. Dick, I can hang out with this narrative. But on my agnosto-meter in which everything is possible but most things are improbable, I give it about a .0001% chance of being mostly accurate.

I would give other "inside job" narratives a higher rating. I might even be willing to go up to 15% odds that some world domination-oriented US militarists within the ranks of the powerful decided that the success of rumored upcoming major terror attacks on the US would help them achieve their national and global political goals and that they did some things to increase the likelihood that the attacks would succeed. Hey, sometimes you feel like a wingnut, sometimes you don't.

The book Debunking 9/11 Myths: Why Conspiracy Theories Can't Stand Up to the Facts, published by Popular Mechanics, deals entirely with issues around physical evidence. They claim to refute the theories about explosives planted in buildings, missiles in the Pentagon and the claims that Flight 93 was shot down in Pennsylvania, among other popular conspiranoid points. They also publish testimony from people who claim that they were misunderstood or misquoted by theorists -- falsely made to sound like they were supporting the theories. Naturally, those who believe in the conspiracy theories dismiss everything in the book and everyone quoted in the book as dupes and conspirators.

On the whole, the book is pretty impressive, although it's thin and it's not footnoted (most pro-conspiracy tracts are full of footnotes, but if you follow the footnotes you might find less than you bargained for.) The editors, David Dunbar and Brian Reagan, claim to have "consulted with more than 300 experts and sources in such fields as air traffic control, aviation, civil engineering, fire fighting, and metallurgy." Many of them are listed in the back of the book. Of course, quite a few of them do work for the government, which provides all the reason required for those on the conspiracy side of the tracks to dismiss the entire book as an adjunct to the whole nefarious government operation.

A few days ago, my audio podcast, The RU Sirius Show, sponsored a live debate on the subject of "inside job" conspiracy theory. One of my goals in putting together this panel was to include a hardcore anti-conspiracy theory skeptic. I started out by contacting the editors of the Popular Mechanics book, but they made it clear they were not interested in debating the other side. This is sort of understandable. Another person who I contacted, who has written specific skeptical comments about these theories told me she wouldn't participate in any debates because she received thousands of pieces of hate mail and several death threats for her column in a left wing newspaper doubting these theories. She didn't want to deal with that sort of fanaticism.

We wound up unable to come up with a hardcore, detail-oriented conspiracy theory skeptic who was available and willing to appear. So I thought I could incorporate some of the Debunking editors' skeptical views into this piece for 10 Zen Monkeys. Debunking editor Brad Reagan expressed a willingness to answer my email questions, but only if the book publicist reviewed the questions and agreed that it was OK. He explained that they had been "sandbagged by some conspiracy theorists since the book came out." I got the queasy feeling that I would only get a response if I asked nothing but softball questions, which I didn't want to do.

I sent off my questions and the response that I got was a compromise: very brief responses to only a few of my questions, apparently intended not as interview material but to help me with my own research.

The publicist explained that Reagan was already over-scheduled, and had magazine deadlines to contend with as well. As a former magazine editor, I can understand this. Still, I must report that my over all experience with conspiracy skeptics has fortified my general impression that neither side in this exchange wants any serious discourse with anyone who doubts their views, even slightly.

Reagan did answer my most important question. The one paragraph that really leaped out at me when reading Debunking blows a pretty big hole in the theories based on the planned demolition of the World Trade Center that seem to dominate most of the conspiracy theories. It reads, "The collapses of the three World Trade Center buildings are among the most extensively studied structural failures in American history. In the five years since 9/11, they have been the subject of lengthy investigations and engineering school symposiums, together involving hundreds of experts from academia and private industry, as well as the government."

I asked Reagan if he could substantiate these claims or provide us with some links that could help us to do so. He sent along the following message, including links: "The American Society of Civil Engineers website has a research library. Search under 'World Trade Center' and you will find numerous papers studying the collapse of the buildings. This link describes the range of experts participating in the NIST investigation. On another site, The Bazant paper is especially instructive. He is one of the world's leading civil engineers."

I'll suggest that those who are in search of The Truth" in this matter would do well to read Debunking with an open mind, and to also follow the leads Mr. Reagan has provided. I would also suggest that those who dismiss all possibilities of government collusion would not be harmed if they admitted to themselves that relegating some of the well-documented fuckups and fiascoes of the American security establishment to incompetence does sometimes seem to stretch the boundaries of credulity.

For example, one of the weaker parts of Debunking is the section where they explain that America was not prepared to defend itself against an attack by hijacked airliners because we'd never dealt with that situation before. But even such mainstream, quasi-Republicanist fare as the recent ABC docudrama The Path to 9/11 showed how, for months, the authorities were getting all kinds of warnings and chatter about "airplanes" and "hijackings" and "a major terrorist attack against the US," and that they were watching suspects who were attending flight schools. And beyond that, this very same TV special echoed the little discussed fact that the revelations about Al Qaeda's plans to use planes to attack the US go back to 1996 with news about "Project Bojinka" and, of course, that the World Trade Center had been targeted before, ad infinitum. Can we really chalk all that up to the glacial pace of government bureaucracy? Definitely maybe, but it does give one pause (or it should).

We live, obviously, in paranoid times. People are quick to conclude that the discursive other -- the person with the opposite point of view -- is "the enemy." And enemies need to be defended against, not learned from. (Actually, one should learn from one's enemies, but I'll leave the Sun Tzu for another occasion.) Thus we see less and less real discourse, not just in terms of the facts and repercussions of 9/11 but across the political board. Maybe we should just split into memetic tribes and have it out in a shooting war. But color me an eternal optimist. I'd like to think that there is still space in public discourse for agnosticism; for uncertainty; and for considering the ideas of the other.