The media tells secret stories, according to blogger Josh Marshall.

"When the story is bad for the president, you find a picture of him caught off guard, embarrassed, looking stupid," he writes. The picture may or may not correspond to the actual news, but editors don't care. "You just need one that shows the guy expressing the emotion the editors think he must be experiencing because of the story they're publishing."

It's not a right-wing/left-wing thing. In the Clinton days "they had a stock 'sad' Clinton picture," Marshall says, "with a sort of 'man, am I bummin' look on his face." Is the media now branding Bush with a "dazed and confused" storyline? 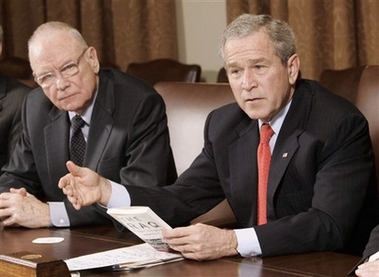 Dismissive Bush
(Associated Press)
"Yes, yes, I have the report, right here in front of me, as you can plainly see. No, I haven't opened it yet. Thought I'd take a look at the back cover first. Now shoo."

That's the message in this AP photograph — but there's something else. Bush has always had a breezy Texas disdain for the press corps he considers negative and biased — Washington's nattering naybobs of buzzkill. Here he's looking up awkwardly, tired eyes averted, gesturing them away, but weakly. It's like he's going through the motions of disdain without really feeling it.

The Democrats' takeover of Congress was called an electoral rejection of Bush's policy in Iraq, and news editors may see that as their cue. ("Now what, Mr. President" asks a (Newsweek) headline.) Wednesday's release of the critical Iraq Study Group report fits that emerging narrative perfectly. ("Panel: Bush's Iraq policies have failed," read one AP headline paired with this photo.) Maybe this picture was chosen for reinforcing that message with subtle visual suggestions of "chastised hesitation."

Or maybe that's Bush's actual reaction, and the news editors are simply providing coverage of the moment — and all its dimensions. Minutes after we spotted this picture in an AP News story, Yahoo had swapped in a different picture. "Iraqis react outside the Yarmouk hospital following an attack in Baghdad."

And what message is the "worried Bush" image trying to convey?

"Hours after the Iraq Study Group urged a radically different approach to the war, the chief White House spokesman told CNN that President Bush may be able to 'announce a new way forward' in Iraq by the end of the year." Looks like he's got some serious thinking ahead, and he's already getting started.

But if you look closely, CNN has just cropped the "Dismissive Bush" photo into a closeup of Bush's eyes. Gone are the helplessly-outstretched hand and the overturned book. Just a man deep in thought.

Maybe they're seeing a different reality — that the President is recognizing the current strategy's weaknesses, or at least registering the public's desire for words of hope. "Baker said he and Hamilton had been 'pleasantly surprised,'" CNN writes, "by President Bush's reaction when they presented the report to him at the White House Wednesday morning."

Nervous Bush
(Reuters)
From deep in thought to deeply disturbed, the President's face turns away — clutching his fingers apprehensively. A cameraman catches him by surprise in a look of distracted dejction.

This picture echoes the pessimism that's evident from Reuters' lead. "The U.S. should begin to withdraw forces from combat and launch a diplomatic push...to prevent 'a slide toward chaos' in Iraq, an elite panel recommended on Wednesday." And the photo utilizes a common visual theme: a wider shot showing Bush stared at by older (and often more serious) men. While this accurately conveys who was in the room, it can also be interpreted as a message from the news editors. It's either a positive message — an example of seasoned White House advisors offering counsel to a pragmatic President — or, a negative message, as the young MBA is called to task for an under-considered foreign policy. ("I said I was gonna read it! You don't hafta keep glaring at me!")

Can you really read history in a man's face — or only project it?

Not-Nervous Bush
(Reuters)
The book is overturned, face down, while Bush looks away. Maybe he hasn't decided whether he'll read it yet. This photo looks like he's still considering the back cover's blurbs. ("Spell-binding! A tour de force! — Ebony")

This photo proves one thing. Bush's face passed from worried to smiley during the press appearance — but most photo editors chose shots conveying a specific tone. Was Reuters trying to show the President as disengaged? Or just displaying admirable objectivity by refusing to match their photo's tone to the news story's theme? Or maybe they just bought into the ongoing storyline of Bush as a Texas homeboy who retained his charm while rising to the responsibilities of the Presidency. It's certainly a popular perception. If you search the web for pages with the word Bush and the phrase "Aw Shucks," you'll get 98,400 matches.

Ultimately the problem with media criticism is it devolves into empty speculation about the motives of an unseen editor — and to their credit, Reuters' caption is completely neutral. "Bush speaks to the press after receiving the official report of the Iraq Study Group."

Although to me the picture screams, "No, I still haven't read it." 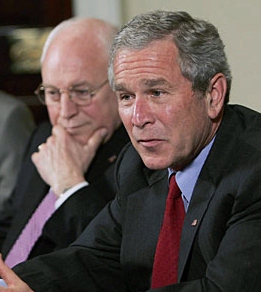 Secret-Smile Bush
(Getty Images)
This picture offers an interesting contrast. It's Dick Cheney (to Bush's right) who has the real secret grin — a quiet, almost smug, Mona Lisa smile that may contain the story of his career. (A scowling Donald Rumsfeld appears in the larger picture.) But President Bush looks like he's catching Cheney's sparkle too — eyebrows arching, eyes lighting with private joy.

This picture is from six months ago, and USA Today chose this picture to accompany a story with a headline nearly the opposite of today's. ("Bush rejects calls for pullout from Iraq.") Neither Bush nor Rumsfeld look particularly concerned, and if you look closer you'll see Bush has fewer grey hairs.

What a difference six months makes.

Josh Marshall remains cynical about the Iraq Study Group's report. On his blog he writes that "[A]ll this report really does is state the obvious (that Iraq's a disaster and we can't stay there forever) in a quasi-public forum." But that acknowledgment is the first step towards an official policy change.

And maybe news editors just want to see another acknowledgment in the President's face.