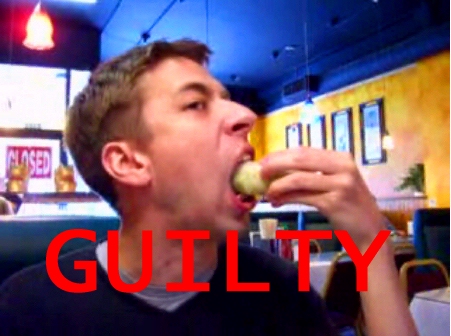 His blog at RFJason.com disappeared, and one anonymous Livejournal comment claims that "he hasn't made contact with anyone for weeks. Even his accomplices don't know what's going on." (Though his personal blog at LiveJournal is still up — with its old tagline "Getting away with everything you can only dream of.")

But now that a judge ordered Jason Fortuny to pay $74,252.56 in various legal fines —what's the internet's final verdict? Was Fortuny's Craigslist prank instructive, malicious — or a little bit of both?


"Why do I hear Aretha singing 'Dancin in the streets'? ;-) Honestly this should be declared an international holiday or something."

"trolls are getting sued now? what is the world coming to"

"This is what happens when you don't put out like you imply you will."

"I love when reality collides with LiveJournal. It's like a super nova exploding."

"If he was a TRULY great troll, he would have done it all anonymously. As it is, he's pretty much in the same position as those dudes who sent him pics... ...consequences got back to him. That's life."

"Well, it's not like the plaintiff won on the merits of the case, if that makes you feel better. He only won because the troll didn't show up to some meetings. Happens all the time in civil court."

"A legal 'appearance' does not mean that Fortuny had to physically appear in Court initially. Rather, he had to properly file the appropriate documents in the correct court.

"Mr. Fortuny failed to do so."

— Charles Mudd, the lawyer in the successful lawsuit

"If you are 13 or older you should expect naked explicit pictures of your ass to show up on the internet. this is 2009 America, after all."

"i'm going to send nude pics of myself to an anonymous ad on craigslist what could possibly go wrong."

"It's like a stupidity contest, except the winner gets to pay ~$75k."

"You don't have to feel sorry for him to recognize that the law is on his side here. Fortuny behaved wrongfully, and now he's suffering the consequences."

"The amount seems a high and random but really 'I did it for the lulz' shouldn't be a valid reason for fucking with someones life. I kind of wonder if there would have been a difference reaction if the guy had targeted a different group [than] male doms."

"I take it back. You might get sued if you do a Craigslist Experiment..."

1. Trolls being sued is ridiculous
2. That doesn't make this any less funny

"Contrary to what some people here want to believe, the Internet is not a lawless libertarian wonderland where you can do whatever the fuck you want without legal consequences. ....If you do these things with the goal of fucking with people, you shouldn't be surprised when they fight back."

3 thoughts to “20 Funniest Reactions to the Jason Fortuny Verdict”