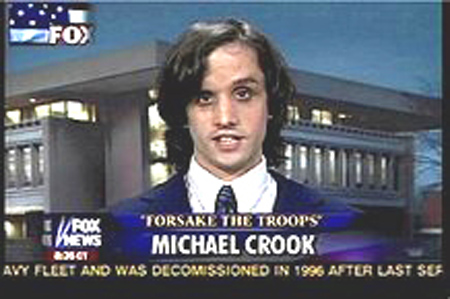 Even while delivering a video apology "to all bloggers, webmasters and other individuals" as part of a settlement agreement with 10 Zen Monkeys, he somehow seems determined to be the most hated man on the internet — if he could just get people to stop ignoring him. (You'll find that video further down on the page.)

Nah, the piece is about that Michael Crook guy.


That web site was registered to Michael Crook, and to this day I'm convinced Crook himself left the comment, hoping to skim off some of the attention. Sure enough, the site showed that Crook had duplicated Fortuny's stunt; he'd posted a fake ad on Craig's List pretending to be a young woman seeking sex in Syracuse, New York. But no one even noticed; according to Crook's own blog, he only got a few dozen responses. He tried posting more fake ads in more cities — Las Vegas, Dayton, South Jersey, Kansas City, and Anchorage — and created a web site with the results.

We noticed, but we weren't impressed. The original title for our article about Crook was "wannabe asshole," although we later changed it to In the Company of Jerkoffs, calling Crook "another sad member of the 'griefer community'... not only pathetic, but a pathetic copycat."
As an after-thought, I'd sent Jeff Diehl, our editor, a screenshot from Crook's appearance on Fox News to accompany the story. ("I think the bad hair and stiff tie and collar say a lot about the guy...")

See Also:
» EFF's Diehl v. Crook page
» Settlement Agreement
» In the Company of Jerkoffs
» The Case Against Crook
» Craigslist Sex Troll Gets Sued
We knew Crook wouldn't like it — but that's life on the internet. (I'm sure the men who answered his fake Craig's List ad didn't like it when he called them at work, either.) Life continued at our up and coming webzine — our next story questioned the press coverage about Willie Nelson's September arrest for possession of mushrooms. And then something weird happened...

Our internet service provider got a nasty email from Michael Crook. Crook wanted the embarrassing picture taken down, and to make that happen, he was pretending he had a copyright over the screenshot from Fox News, citing the "Digital Millenium Copyright Act" (or DMCA). I suggested a new headline for Jeff. "Syracuse jerk uses heavy-handed DMCA mumbo-jumbo to try to intimidate web pages he doesn't like."

We were clear that Crook had no legal claim. But his amateurish legalese spooked our spineless (pre-Laughing Squid) ISP, who asked Jeff to remove the image anyways. Jeff knew there was something wrong. In the world we live in, internet services can absolve themselves from future legal liability — if they quickly remove the suspect material. This means if someone wants an embarrassing picture taken down, simply masquerading as its copyright holder can be enough. So Michael Crook was pretending he owned a copyright on someone else's picture of his face.

Crook's legal interpretation was as laughable as the Batman comic book where the Joker claimed a copyright on a fish that looked like him.

But deep within the DMCA law is a counter-provision — 512(f), which states that misrepresenting yourself as a copyright owner has consequences. Any damage caused by harmful misrepresentation must be reimbursed. In 2004 the Electronic Frontier Foundation won a six-figure award from Diebold Election Systems, who had claimed a "copyright" on embarrassing internal memos which were published online. So not only was Jeff Diehl legally free to publish Crook's picture; Crook was in violation of the law for pretending he owned a copyright.

The Electronic Frontier Foundation now agreed to represent us. Crook hadn't just issued a copyright notice to 10 Zen Monkeys; he'd sent them to other web sites, again pretending to own the copyright on Fox News' image, to trick the sites into taking his picture down. (There were even cases where he served DMCA notices to websites that published Fair Use quotes from his blog.) Crook was a serial abuser of the copyright law — and so far his misuse of it had been rewarded every time. Some webmasters and bloggers obeyed the takedown notices without considering the counter-claim process, to avoid having to give Crook their identifying information — which he'd publicly demonstrated he enjoyed using maliciously.

But it was a mistake to try his stunt anywhere near Silicon Valley, where people closely follow how technology is evolving, and care deeply about protecting free speech online. Local web stars cheered on the lawsuit at sites like BoingBoing and Valleywag (where Nick Douglas wrote, "This Emo Kid is Getting Sued," and later begged Crook for a DMCA takedown notice of his own — which he got and displayed proudly). Someone had finally noticed Michael Crook — but for all the wrong reasons. Web sites were now re-posting even more copies of the picture he hated.

Crook tried hiding from the delivery of the legal documents — then later blustered on his web site that he'd successfully re-structured his business holdings to make it hard to collect. In a futile go-for-broke strategy, he then sent even more bogus DMCA notices — to other web sites which were reporting on his original bogus copyright notice. "I wonder if this is another one of his stunts for 'bad attention,'" I asked Jeff. "Everyone online hates the DMCA; maybe he's deliberately abusing it, the way Andy Kaufman used to bait professional wrestling fans."

For a brief moment it was Michael Crook versus the internet — until Michael Crook lost in a blow-out. Ignoring Crook's amateurish legal posturing, Fark.com users created over 50 versions of the supposedly-forbidden photo, photoshopping Crook's face into even more embarrassing poses. Someone tracked down Crook's high school yearbook photos (which, ironically, ended up being mocked in the blog of the original Craigs List prankster, Jason Fortuny.) Someone even uploaded the photo into the virtual gaming world Second Life. (Crook then tried unsuccessfully to issue a DMCA notice against a photo of that photo.) The ongoing mockery became a kind of online seminar, reminding web surfers to stand up to copyright law abusers, and to never pay attention to the Michael Crooks of the world.

In November, web writer Tucker Max called out Crook for an online debate. Crook accepted — though he only made three short posts, apparently caught off guard when Max refused to take Crook's weird positions seriously and instead attacked Crook himself. "You are desperate for attention," Max wrote, "and the ability to feel something, anything, you are willing to be the most ridiculed, hated person on the internet. Look at yourself dude. Look at your life." Max even claims he used his contacts as a law school graduate to guarantee that Crook, who says he wants to one day be a lawyer, will never pass the bar.

But abusing copyright law was only Crook's latest attempt at provoking attention. He'd previously claimed to hate the military, Jews, gays, immigrants, non-whites and children. Max noted that Crook tried to join the army, and had been rejected; and that Child Protective Services had taken his children away. Were Crook's attacks just a misguided lashing out over his own bitter failures?

The online world was faced with the griefer paradox: that griefers want bad attention, and the only real answer is ignoring them. Behind the scenes, the EFF was working to establish the only true point of the case — that web sites didn't have to buckle in the face of bogus copyright threats, and that abusing the DMCA would bring consequences.

Because Crook proved himself to be legally indigent, and was representing himself in an incompetent way that would likely have lessened the impact of an official judgment, it was decided that a settlement agreement could accomplish just as much, possibly more. Crook eventually signed such an agreement. It requires him to 1) take a course on copyright law basics; 2) never again file any cease and desist notices concerning the image of him on Fox News; 3) withdraw each and every DMCA notice he served regarding the image; 4) refrain from filing any DMCA notices for 5 years unless the material in question is personally authored, photographed or originated by him; 5) include in any DMCA notice during that 5 year period, URLs pointing to the EFF's web page summarizing this case; 6) turn over ownership of any domain names to Jeff Diehl and 10 Zen Monkeys if he is caught violating any of the terms of the agreement.

And, finally, he had to formally apologize to those he harassed. In video. Here now, is that video:

This work is licensed under a Creative Commons Attribution-Noncommercial-Share Alike 3.0 License.