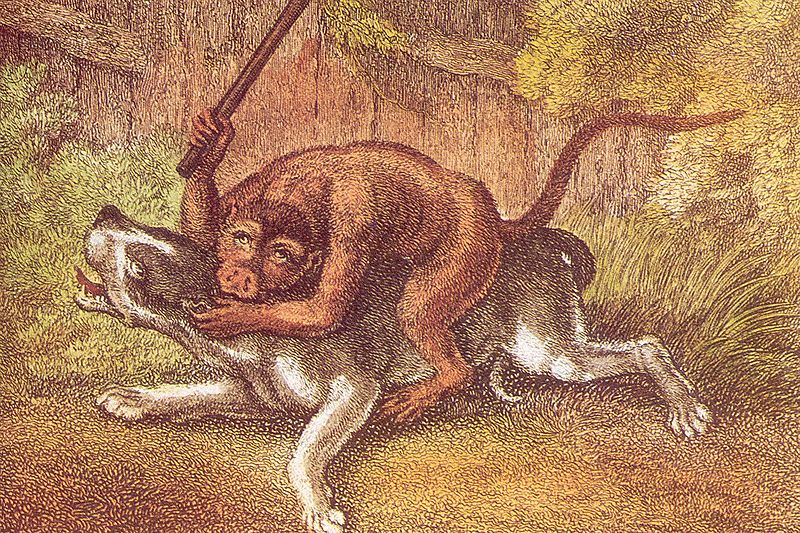 A monkey versus a dog. Who would win in a fight?

Wikipedia has the answer, but sometimes being a source of such answers comes at a price.

As with seemingly every other topic on the site, an anonymous expert sprung from the grass roots to detail the fascinating, hidden history of prizefights between dogs and monkeys. "A quite unusual fight between two animals was staged in Worcester," read his description of one fight, taken from an obscure magazine article from 1799.

The wager stood at three guineas, according to which the dog would kill the monkey in at most six minutes. The dog's owner agreed that the monkey would be allowed to defend itself with a stick about a foot long.

Hundreds of spectators gathered to witness this fight and the odds stood at eight, nine and even ten to one in favour of the dog, which could scarcely be subdued before the fight. The monkey's owner took a stick, about twelve inches long, from his coat pocket, tossed it to the monkey...

There's even an illustration — titled "Battle of the Bulldog and the Monkey" (above) — from 1799.

So who won the fight?

The monkey was amazingly nimble, jumped about three feet high in the air and when it came down landed directly on the dog's back, bit firmly in the dog's neck, grabbed his opponent's left ear with his hand thereby preventing the dog from turning his head to bite him.

In this totally surprising situation the monkey now began to work over the dog's head with his club and he pounded so forcefully and relentlessly on the dog's skull that the poor creature cried out loudly...

Eventually the dog's corpse is carried from the ring. ("Yet, the monkey was only of medium size....") Yes, it's a cruel fight-to-the-death. What's more surprising is that someone in 1799 went to the trouble of carving an engraving to commemorate the event. (Hey, 18th-century dog-fighters — get a life!)

Then again, back here in the 21st century, Wikipedia editors would pick apart a description of the event sentence by sentence in a dog-fight of their own. Reading the article's "History" page ultimately offers its own morbid spectator sport. In a six-part, 1400-word entry, user SirIsaacBrock (according to his user page, a Canadian MBA) first described recreational "monkey baiting" in March of 2006 — and was unaware that his status as a Wikipedia editor would soon come to an end.

"Monkey-baiting is a blood sport involving the baiting of monkeys," his original entry began — linking the words "blood sport," "baiting," and "monkeys." Within two weeks another Wikipedia user had tagged the article with a warning flag.

It is proposed that this article be deleted, because of the following concern:

The user was later reassured by Sir Isaac's involvement in another full-scale WikiProject — documenting various forms of animal baiting — and left an apology on Sir Isaac's own Wikipedia discussion page. (Six days later, another user would also add: "Thanks for the correction in Badger Baiting...") In fact, there's a whole series of Wikipedia articles, on everything from duck baiting to rat baiting and donkey baiting.

"Badger-baiting is a blood sport involving the baiting of badgers."

"Donkey-baiting is a blood sport involving the baiting of donkeys...."

But the monkey-baiting page remained controversial. Sir Isaac presented an 1820 description of a second monkey/dog fight — this time between a dog and Jacco Macacco, "a celebrated monkey gladiator" who could dispatch opponents in 3 minutes.

"What a monster!" said a greasy butcher, who sat there with open mouth, a red nightcap on his head, pointing at Jacco Macacco. "I bet a leg of mutton on the monkey! You could strike me down if I ever saw such a thing before in my life... "

"It is amazing how many owners would send their dogs to almost certain death," Sir Isaac had written.

"This strikes me as unwiki," another editor complained, saying it was not objective fact, and adding, "I personally do not find it 'amazing.'"

Another user complained about the article's "wholy innapropriate origional research [sic]." Of course, research about 18th-century animal fights is hard to find — and a year later, the article remains online, a testament to one user's dedication to his personal topic of interest.

Within four months of creating his page about monkey/dog fights, a warning appeared on his user page saying he'd been identified as "the puppet master of one or more abusive or block/ban-evading sock puppets." (Sock puppets are deceptive online identities.) He has since been banned from Wikipedia.

In a way, it's ironic. SirIsaacBrock was a man who could tell you who'd win in a fight between a hunting dog and a rage-filled monkey — but he couldn't stay online against a handful of Wikipedia editors. Will he be hard to replace? How many amateur historians are available with an interest in monkey-baiting?

We can only hope that his obsessive and self-destructive work will inspire a new generation of Wikipedians to continue to monitor this deserving subject matter. Or, better yet, perhaps there's another sock puppet out there at this very moment, waiting to ambush us with the latest and greatest in monkey-baiting.